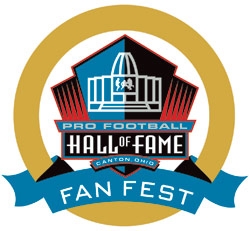 Scheduled May 3-4, the event will enable attendees to interact with 100 Hall of Famers, including such football legends as Terry Bradshaw, Joe Namath, Warren Moon, Anthony Munoz, Rod Woodson, Lynn Swann and Earl Campbell, to name a few.

“As a Pro Football Hall of Famer, I realize more than ever how much I owe to the fans who gave me so much support as a player,” said Terry Bradshaw, who was inducted in 1989.

He added, “I always receive such a warm reception from fans, and this Fan Fest is a great chance to say thanks to the Hall of Fame fans of the game.”

The two-day event will cover more than 1 million square feet of space at the I-X Center and will feature a variety of activities perfect for everyone from the die-hard to the casual football fan.

Here are just a few of the events on tap:

Pro Football Hall of Fame exhibit with artifacts from the Hall of Famers’ playing days on the field. The players also will be on hand to talk about pro football history;

Football clinics with the legends on a full-size 100-yard indoor field;

Chalk talk with the Hall of Famers looking ahead to the 2014 NFL draft;

Hall of Famer Bradshaw will perform his one-man show, which was launched this past summer at The Mirage in Las Vegas.

“I-X Center is one of the nation’s premier exhibition facilities, accustomed to handling the anticipated two-day crowd of 60,000 people,” said Brad Gentille, president and CEO of I-X Center Corp.

He added, “We are excited to join our exceptional production partners, Pro Football Hall of Fame Enterprises and BaAM Productions, to deliver an unprecedented sports and entertainment event with 100 Hall of Famers. The I-X Center offers more than 10,000 free parking spaces immediately adjacent to the facility and is conveniently located with easy access between multiple major freeway systems and nearby hotels.”

He added, “With such a wide variety of activities, from football clinics to autograph signings, the Fan Fest will allow people to interact firsthand with the players and will truly have something for everyone.”

The Pro Football Hall of Fame Fan Fest is just one of several consumer events held at the I-X Center. Some others, which are owned by the venue, include the Fabulous Food Show and the collocated AUTO-RAMA and I-X Piston Power Show.