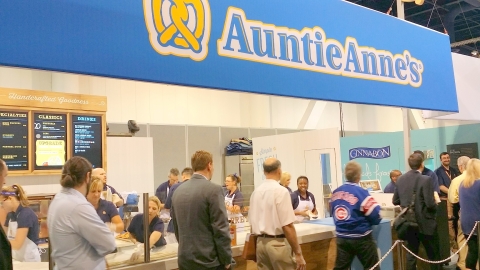 Focused and busy would be one way to describe the vibe at RECon 2014, a trade show and conference for retail real estate that took place May 18-20 at the Las Vegas Convention Center.

Spanning approximately 1 million square feet, it featured about 1,100 exhibitors and brought together 33,500 industry professionals who were ready to capitalize on the improving real estate market. While square footage remained the same as last year, attendance and exhibitor count saw a slight uptick.

“During the recession, the bottom fell out, and since then, it’s been a steady climb for us that mirrors the U.S. economy,” said Jesse Tron, communications and public relations manager at International Council of Shopping Centers (ICSC), which runs the show.

Tron noted the growth of outlet malls and smaller properties, as well as a strong trend of reinvesting in current retail real estate assets and maximizing their effectiveness.

“Retailers are expanding again and looking for more space,” he said. “Soon, there will be new builds coming into the pipeline.”

How was that reflected on the showfloor? Lenders are back in en masse. “We sold out the finance pavilion and had a waiting list,” Tron said.

To help landlords reinvest in their properties, the show created the new Marketplace Mall area that featured product and service providers to commercial properties. It also was sold out.

Lots of activity was happening on the showfloor. From dancing fountains to bungee jump towers to wind tunnels, the only thing missing was artificial snow for ski slopes in malls, Dubai-style.

Food retailers remained the favorites, giving out samples and driving traffic to the very back of the halls.

“We gave away over 175 gallons of frozen yoghurt, which is double of last year,” said exhibitor Jamie Erickson with Menchie’s Group Inc.

While the line was always there, the company relied mostly on pre-set appointments for business meetings and is hoping to move to the South Pavilion next year.

First-time attendee Steven Tulgan with Ferrara Jerum Intl. also had a full schedule. “I am blown away by the sheer size of the show and also by how helpful and accessible exhibitors are,” he said. “Here, I can connect with all our tenants quickly and efficiently.”

His one wish about the show? He wanted more dynamic navigation functionality with the show’s app that would help him find his way around in real time.

When not racing around the floor, attendees could relax and learn at the ICSC Coca-Cola Happiness Lounge.

Planning for 2015, ICSC is considering the addition of the recently acquired Spree Show (Specialty Retail Leasing Show) to RECon.

“It has a great synergy with our show because many big developers also have specialty leasing teams and they’re all exhibiting at the show anyway,” Tron said. The details of the collocation should be finalized in the coming months.