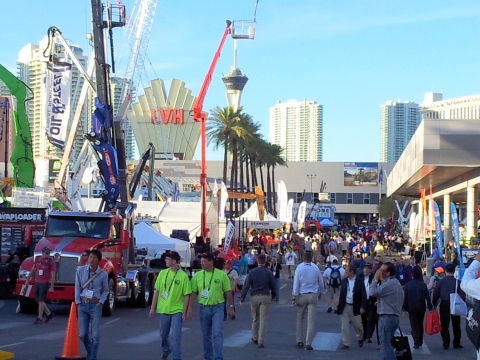 The Association of Equipment Manufacturers’ CONEXPO-CON/AGG sprawled over the Las Vegas Convention Center campus March 4 -8 beating even the most optimistic expectations.

“These are our largest shows ever,” said Megan Tanel, vice president of exhibitions for AEM.

Registration was moved to LVH, the hotel/casino next to the LVCC, and long lines during the first two days were reported. No other registration areas were available, but there were several information kiosks that helped people find their way around.

Every inch of parking around the LVCC had been turned into a showcase of construction equipment. From elaborate double-deckers to a park by Caterpillar, this was no pop-up tents space.

This year, the show also covered the Platinum Lot on the far end of the LVCC campus. The Gold Lot had to be reinforced to support massive construction equipment, notably the 265-tonne Liebherr crawler crane and literally tons of other equipment.

“All parts of the show have seen good traffic,” said Richard Jefferson, senior director of public relations. “I expect (the exhibitors) did much better than in 2011. People feel better about the future.”

Jefferson noted that one of the challenges the construction industry faces at the moment is the ambiguity surrounding the long-term highway bill. “We need it so that contractors can buy new, bigger, more efficient equipment,” he added. “They can’t do that without knowing the future of the funding.”

International attendance was expected to reach about a quarter of the overall attendance, with a strong contingent especially from South America. “We’re already gearing up for CONEXPO Latin America in Santiago, Chile in 2015,” Jefferson said. “It promises to be a very energetic show for the manufacturers down there.”

The show also is making great strides with a pilot attendee/buyer acquisition program that has recruited some 485 buyers and 42 non-industry guests with an average company net revenue of $41.5 million.

This year, the event ended on the weekend of the NASCAR races in Las Vegas. On Friday, the show participants had a rare chance to test out the track and get to know drivers and cars at the “Night at the Races” event.

Right before 5 pm the same day, the showfloor and the outdoor areas still were crowded. “Attendance is definitely up, compared to three years ago,” said exhibitor Shawn Casey, president and CEO of FINN Corporation. “Back then people were not sure what work they had ahead of them. Some have been putting off buying new equipment since 2007. Now, they have actual work. The number of leads we got is at least twice, if not three times compared to three years ago.”

He added that he didn’t place any actual orders at the show, but said he found at least three products he plans to research further.

“We’re expanding our plant and improving our production capabilities,” Hellwig said. “I’ve been to several auctions over the past few months. We’re on track for a better year than last year.”