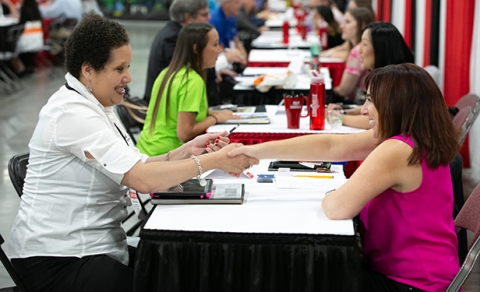 Around 4,000 industry professionals will converge in Louisville, Kentucky, this week for Connect Marketplace, a trade show and conference for those who work in meetings, events, travel and tourism,

Set for Aug. 26-28 at Kentucky International Convention Center — around the one-year anniversary of the facility’s renovation and re-opening — the annual hosted-buyer event will present an array of engaging content, lively networking opportunities. The signature reverse-style trade show portion of the event will connect planners with suppliers from CVBs, hotels, convention centers and technology providers.

“I am so excited to bring Connect 2019 back to Louisville,” said Nicole Corley, director of meetings at Connect. “The city is buzzing with Southern hospitality, good people, and delicious drinks and food. The new convention center will be a major highlight of Connect this year, along with the new trade show concept, where planners and suppliers can get education, entertainment, and inspiration in a one-stop spot.”

The inaugural, more “traditional” trade show will include 125 exhibit booths interspersed with fun features including an ice cream vendor, a Topgolf swing suite, a coffeehouse and several experiential booths, she added.

American competitive swimmer Michael Phelps, the most decorated Olympian in history, will deliver the opening keynote. Academy Award-winning actress Nicole Kidman, who's also a Goodwill Ambassador for UN Women (which focuses on raising awareness of ending violence against women and girls), will be the closing speaker.

Connect Marketplace organizers committed to hosting the show in Louisville in fall 2017 after confirming the KICC renovation would be completed before 2019. The event last met in Louisville in 2010.

“We are thrilled to have the opportunity to once again showcase the city of Louisville to such an important audience,” said Karen Williams, president and CEO of Louisville Tourism. “Hosting Connect Marketplace 2019 will support our mission to continue attracting world-class industry trade shows in Louisville.”

According to CVB estimates, the economic impact of Connect to the city of Louisville is approximately $4.4 million. However, as with any destination that hosts a large group of meeting planners, the city stands to benefit additionally from the prospective future convention bookings that will likely occur as a result of the city showcasing its convention package.

To help with this effort, Louisville Tourism has planned several special events and features for Connect participants to enjoy, including sponsoring a “pink-out” welcome party at Churchill Downs for breast cancer awareness (during which everyone is asked to don something pink), chalk art downtown and free artist entertainment outside KICC in the form of buskers. The buskers are part of the Art in Lou pilot program, in partnership with the Fund for the Arts, to provide artists with paid opportunities to perform for the community in public spaces.

“We are so pleased to be the host city for the 2019 Connect Marketplace,” said Louisville Mayor Greg Fischer. “This is a time of great transformation for our city, and we’re proud to host the meeting industry’s top event professionals and give these decision-makers a front-row seat to the nearly $1 billion in tourism-based infrastructure improvements underway here.”