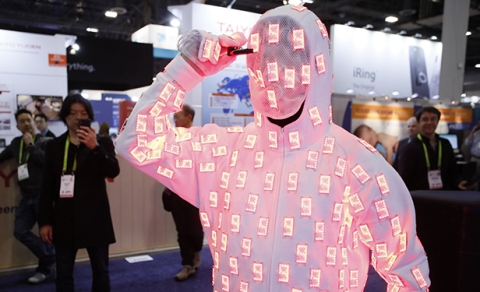 Despite the slight hiccup of a power blackout at the show, CES, the world’s largest consumer technology event, set a new size record this year with a 2.75 million net square foot expo floor featuring 3,900 exhibitors.

Held Jan. 9-12 at the Las Vegas Convention Center and venues throughout the city, the 51st annual event for the global tech industry attracted more than 175,000 attendees from 150 countries.

In 2017, CES spanned 2.6 million net square feet, with its attendance and exhibitor numbers on par with this year.

Touted as a gathering of the world’s greatest innovators, the show offered glimpses of the future with self-driving cars, Artificial Intelligence, 5G connectivity, “smart” everything and even a quantum computer that at the moment looks like a giant chandelier but is set to change our world with hard-to-fathom computing speeds.

She added: “From driverless cars to smart cities to sports, the whole new areas that we’ve built out were just ideas last year.”

On Jan. 10, CES experienced a power outage throughout major parts of the LVCC, caused by a flashover of one the facility’s transformers due to record rainfall. Some power was restored within minutes and the entire space was back online with a couple of hours.

No doubt a challenging incident, this unexpected event also became a real-life test of the show’s LiveSafe app.

Introduced this year, it enables two-way communication between everyone on the showfloor and show management to report safety issues in real-time and get connected with facility security personnel, all with a push of a button.

“It allowed instant reports about the show, such as an escalator being down and for us, it was a way to deliver rapid response about safety and security,” Chupka noted.

Within CES’s conference programming, diversity continued to be a topic of discussion fueled by the recent controversy over the show’s lack of female keynote speakers. In response, show officials pointed out that CES featured more than 240 female presenters throughout its education program, including U.S. Secretary of Transportation Elaine Chao.

Despite these issues, the CES showfloor remained busy, even at closing.

Flipping through several pages of notes, Benjamin Jackson, an engineer with Rolls-Royce, said he was very pleased with his CES experience and all the ideas he had found that he could use at work and home.

“Sensors and Bluetooth connectivity were impressive,” he said. “I also like the robot that folds your clothes and Sony’s 8K TV is incredible.”

Exhibitor Samya Anchoum with France-based Kolibree, said her company had gathered strong pre-orders for their gaming toothbrush, which uses augmented reality on a smartphone to inspire reluctant brushers.

“Kids defeat evil monsters by brushing their teeth,” Anchoum said. “It’s a game but it’s also serious because it shows them where to brush.”

Hey, Google! Connectivity with Google Assistant as well as Amazon’s Alexa were among the key characteristics of many new gadgets introduced at the show, with Google running activations in the convention center lobbies that attracted long lines of attendees waiting to participate and win branded merchandise.

CES will return Jan. 8-11 to the Las Vegas Convention Center.

NACV Show Will Expand Its Footprint and Offerings in 2019
The North American Commercial Vehicle Show (NACV Show), a biennial B2B trucking industry trade show designed for commercial vehicle fleet owners, managers and decision-makers…
UBM Expands Footprint in Shanghai
International exhibition organiser, UBM plc, has detailed plans to expand its business in Shanghai in the coming years, by moving and growing existing shows, completing new…
Marketing Firm mdg Expands Its Footprint with Chicago Office Opening
Trade show marketing firm mdg has expanded its foorptint by opening a new office in Chicago to service several clients based in the area. The downtown office will be led by…
Marketplace Events Grows Its Holiday Consumer Show Footprint With Multiple Acquisitions and Launches
North America’s largest consumer show producer, Marketplace Events (MPE), is continuing to make a strong post-pandemic comeback by significantly expanding its holiday show…
ON Services Expands Footprint with New Phoenix Location
Full-service audiovisual provider ON Services has opened a new operation in Phoenix to meet the needs of its growing business. The new office will serve as ON Services’…
Raccoon Events Expands U.S. Footprint With Snowbound Expo Acquisition
U.K.-based Raccoon Events has made its first acquisition, as it continues to expand its U.S. footprint by forging a long-term partnership with Snowsports Industries America…