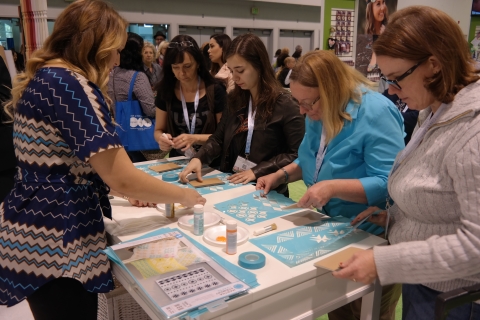 The Craft & Hobby Association has transformed its CHA MEGA Conference & Trade Show into Creativation, a refreshed, reimagined event for the crafting industry. Set to debut Jan. 19-23 at the Phoenix Convention Center, the rebranded and reinvented show will feature new programs, learning opportunities and networking events; a targeted focus on innovation, collaboration and creative entrepreneurs, and at the heart of it all, a completely redesigned trade show floor.

As the annual trade show and conference for the global creative products industry, the event brings together manufacturers, retailers, designers, makers, emerging businesses, influencers, bloggers and creative professionals for four days of networking, education and crafting.

Modeled after Main Street USA, Creativation’s new townscape-style show floor will feature a variety of interactive elements, including a registration lobby train station where attendees can pick up their “train tickets,” aka badges, and board a hop-on/hop-off shuttle bus for a tour of the show’s colorful “neighborhoods” along show floor aisles reinvented as city streets.

Other clever new features include an edible arts bakery, a maker space, an international pub, an art studio, “outdoor” parks and at the center of the show, a town square where attendees can converge, network, and enjoy some street entertainment provided by mimes, magicians, and even a living statue.

“One thing that inspired the neighborhood city theme is that our show is like a huge family reunion every year, so we wanted to create a place for them to come home to,” said Andria LaJeunesse, CHA vice president of events and education.

As the event’s education hub, Creativation University will offer a wide range of seminars, workshops, training and insights focused on the industry’s most popular techniques and projects, such as fabric painting, home décor and fashion.

Besides a brand new show floor, Creativation will offer several new features and special events, including the Innovations Center, where attendees can discover never-before-seen ideas, trends, methods, techniques and devices through hands-on and interactive displays, while “The Ultimate Pitch” contest will give five out of 25 hand-selected innovators the chance to pitch their creative product to a panel of judges and compete to win $10,000 (think “Shark Tank,” but for the crafting industry).

Offsite, guests can rub shoulders and network at the reinvented CHA Foundation Gala charity event, Creativation Celebration, to be held at the Arizona Science Center’s CREATE interactive maker space, and at the whimsical after party and fashion show at The Duce, a retro-chic restaurant and entertainment venue in the heart of downtown Phoenix

The brainchild of LaJeunesse and CHA’s marketing team, Creativation came into being after the association realized it was due time to update its 76-year-old trade show to better meet the needs of its membership.

“In 2015 we partnered with a strategic branding agency to help us figure out how our association could better serve and guide our membership through the financial changes in our industry,” said LaJeunesse.

She continued, “We’ve seen a lot of changes in our retail landscape…(and) we determined that one of the ways we could help our members understand those changes was to completely redesign our annual conference and trade show from the ground up, creating an entire experience where industries can come to learn, connect and discover.”

Relocating the show from its almost decade-long run at the ACC to a new convention center landscape in Phoenix also offered CHA the perfect opportunity to scrap its old show floor design and recreate an entirely new, more imaginative show floor experience.

“Our general service contractor is Nexxt Show, and they’ve been with us from day one and their designers have been amazing in bringing it to life,” said La Jeunesse. “It’s been an amazing development from a tiny seed of an idea, to our marketing team taking it the next step, and then the rest of the team here working together to make it a reality.”

Despite the slight drop in exhibitor numbers, the show’s footprint has expanded due to exhibitors investing in larger booth spaces, as well as taking advantage of greater branding opportunities. As a result, the show’s sponsorship investment has grown by 58 percent, according to LaJeunesse.

“We’re in a rebuilding year and we have a lot to prove,” she said. “The buzz in our industry is flowing like crazy right now with all the social media and people getting ready for the show, so we just want them to have a good time, and hopefully all that buzz (will continue) and in the next few years we’ll see more positive growth.”

Craft & Hobby Association Mega Conference and Trade Show Celebrates 75 Years
The CHA Mega Conference and Trade Show, the annual show for the Craft & Hobby Association that was held Jan. 7-12 at the Anaheim Convention Center, celebrated its 75th…
Getting Non-Attendees to Your Trade Show Booth
Being at the correct trade show is one of the most opportunity-rich environments a company can participate in to secure face-to-face time with potential customers. In…
CEIR TOTAL Index: Trade Show Industry Continues Its Growth Streak in Q1 2018
The Center for Exhibition Industry Research reports that the recent growth of the exhibition industry continued during the first quarter of 2018. The performance of the…
How to Get the Most Out of Your Trade Show Display
Trade shows are crucial to the growth of many businesses. They are competitive events but can lead to the successful business relationships. The key is to stand out in the…
How to Get (And Keep) People Engaged With Your Booth During a Trade Show
The day of a trade show can be hectic but it’s also when all of your pre-event efforts will pay off. The time you spent tracking and managing segmented guest lists will now…
Get the Most Bang for Your Trade Show Marketing Bucks With Trigger Systems
Another month, another trade show. Your company attends so many, they should have the process down to a science. And yet, it often feels like people are reinventing the wheel…