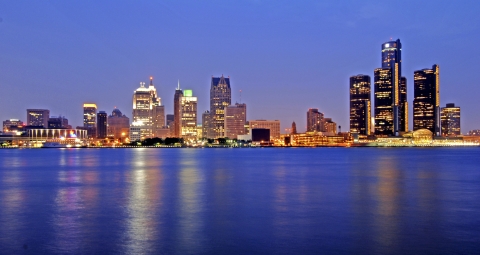 Despite the Chapter 9 bankruptcy filed by the city of Detroit last week, the meetings and conventions business won’t be impacted, according to Detroit Metro Convention & Visitors Bureau officials.

They added that events already held in the city or ones that are considering Detroit for the first time will find their experience ‘seamless’.

Detroit is the largest U.S. city to file for bankruptcy protection in federal court, laying the groundwork to help the city recover from an $18 billion deficit, loss of population and tax revenues.

The meetings and conventions business in the city, however, is thriving, according to Larry Alexander, DMCVB’s president and CEO.

The SMG-managed Cobo Center also is more than halfway through its $279 million renovation and expansion, which is adding a 40,000 square foot ballroom, 25,000 sq. ft. of meeting space and a new atrium.

“The private sector has invested in Detroit at unprecedented levels over the past two years, bringing in close to 12,000 new employees and $11 billion in new economic development,” Alexander said.

He added, “Officials managing the bankruptcy recognize that visitors and conventions are key to a successful city and will work hand in hand with the private sector to continue the positive momentum in Detroit.”

Rod Alberts, executive director of the North American International Auto Show, the largest event, by far, held at the Cobo Center, released a statement last week that said the show and the center will not be impacted at all by Detroit’s bankruptcy filing.

“Cobo Center is independent of the city and is managed and operated by a regional authority, so no funding from the city is needed for Cobo,” Alberts said.

He added, “The NAIAS is also an independent organization and will not be impacted in our operation or funding, although we do work with all the city municipalities in the region, including the City of Detroit, and will continue to do so.”

Every year, the show brings $350 million in economic impact to the Southeastern Michigan region. The 2013 North American International Auto Show had total ticketed attendance for its 2013 show of 795,416, compared with 770,932 last year.

“The city bankruptcy will have no effect on the show's ability to provide the venue that the world automakers have come to expect,” Alberts said.

Both Alberts and Alexander supported city officials’ decision to file for Chapter 9 bankruptcy.

“Bankruptcy is a difficult, but clearly an unavoidable step that will pave the way for a viable and sustainable future for the city of Detroit,” Alexander said.

He added, “We are fully supportive of this decision if it will solve the city’s financial challenges expeditiously and allow the city to move forward.  Detroit has been enjoying an amazing comeback, and putting our financial house in order is part of that comeback.”

Alberts said, “The bankruptcy filing was a good decision, given the state of affairs of the city over the past decade, and will give Detroit an opportunity to move forward by relieving the city of a legacy of liabilities - giving it a fresh start. That was the sole purpose.”

He added, “The direction by Detroit Mayor Dave Bing and Michigan Governor Rick Snyder was the right one, and will help Detroit turn the corner. Although surprising to many, it was a bold and positive move.”

Since January 2010, some other cities and counties that have filed for bankruptcy include Stockton, Calif., Harrisburg, Penn., Boise (Idaho) County and Jefferson (Alabama) County.