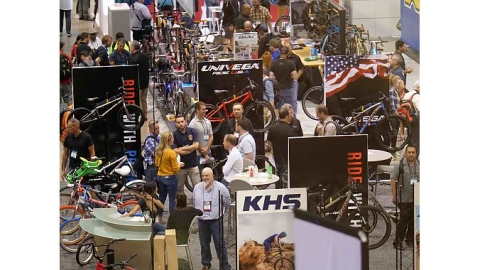 Emerald Expositions has canceled next year’s Interbike International Expo that was scheduled to run Sept. 18-20 in Reno, Nev.

Instead, the company says it will research alternative plans for 2020 and beyond, including the opportunity to launch events featuring bicycling and bike-related components within or alongside its various multi-sport trade show franchises.

“The past four years have been difficult for the U.S. bicycle market,” said Darrell Denny, executive vice president of Emerald Expositions’ Sports Group.

He added, “The substantial increase in tariffs on bike related imports during 2018, and announced for 2019, is compounding these challenges. As a result, we are rethinking how to best serve the cycling industry and will conduct a review of the possible timing, locations and formats with dealers, brands, distributors, reps, designers and media over the coming months. Our goal is to develop and deliver thoughtful solutions which provide strong returns on investment for all industry participants.”

Besides challenges with tariffs, Denny also pointed to considerable consolidation in the market in the past six years and declines in overall margins in the industry.

He added, “Plans we are working on include tapping into interest on a more super-regional basis, evaluating best timing and locations and considering co-location opportunities with some of our other events that offer crossover benefits.”

“Justin, Andria, Andy and Jack have dedicated themselves to the cycling space and worked long and hard,” Denny said. “We will miss them greatly and wish them the best on their future endeavors.”

According to an article about the show’s cancellation in Bicycle Retailer & Industry News (which Emerald owns), in an unrelated move, Lori Jenks also is leaving Emerald.

Jenks is senior vice president of Emerald’s trade show operations and works out of the San Juan Capistrano office where Interbike is based.

Established in 1982, Interbike has been the leading bicycle trade event in North America, bringing together manufacturers, retailers, industry advocates, distributors and media to conduct the business of cycling.

Interbike Picks New Home in Reno, Nev.: Will Launch Interbike MarketWeek
Emerald Expositions’ Interbike cycling show will be leaving Las Vegas and has selected the Reno-Sparks Convention Center in Reno, Nev., beginning in 2018 and continuing…
Don’t Let a Cancelled Trade Show Cancel Your Marketing Goals
Has a cancelled or postponed trade show made you feel stuck and wondering when you’ll be able to pick up where you left off? You don’t have to wait until trade shows can…
Once Massive Computer Show CEBIT Canceled
Hannover, Germany-based mega-show CEBIT, which was focused on computers and in its height attracted up to 1 million attendees, will no longer exist as a standalone event,…
IMEX 2021 in Frankfurt Is Cancelled
IMEX announced on Monday that it is cancelling its annual trade show and conference in Frankfurt this year. The prestigious trade show and conference was scheduled to be held…
Emerald Expositions Buys Another Show - RFID Journal LIVE!
Emerald Expositions has acquired its third show in the past several weeks - the RFID Journal LIVE! Event - from RFID Journal. The company also bought National Pavement Expo…
Clarion Events F&B Group Cancels 2020 Summer Trade Shows
Clarion Events Food & Beverage Group has cancelled four of its 2020 restaurant, foodservice and specialty coffee trade shows in California, Florida and Illinois due to…