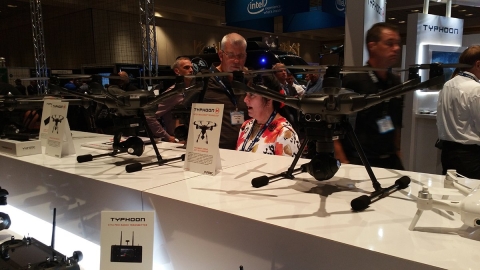 Emerald Expositions is continuing its buying streak by snapping up the International Drone Conference and Exposition (“InterDrone”), a commercial unmanned aerial vehicle (UAV) trade show and conference based  in North America, from BZ Media LLC.

Launched in 2015, InterDrone quickly has established itself as one of the top events focused on the commercial applications for UAVs, according to Emerald officials.

“Congratulations to Ted Bahr and his team at BZ Media for successfully identifying this market opportunity and building a strong event that provides a platform for commercial interaction and education to this burgeoning industry”, said David Loechner, president and CEO of Emerald Expositions.

He added, “We have seen first-hand the emerging interest in drones in our two professional photography shows, and we are excited at the prospect of leveraging our scale, experience and expertise in trade shows and conferences to deliver even greater benefits to attendees, sponsors, exhibitors at InterDrone and to the entire UAV industry.”

In their March 2016 report, Drones Reporting for Work, Goldman Sachs estimated the global market for commercial application of drone technology at about $2 billion, and projected the market opportunity during the next five years at more than $100 billion.

In its second year, the InterDrone 2016 show attracted more than 150 exhibitors and over 3,500 attendees from 50 states and 54 countries.

The breadth of non-defense UAV markets represented at the show demonstrates the broad application of this technology in commerce. Such markets include aerial photography, surveying & terrain mapping, construction & building inspection, agriculture, real estate, cinematography and more.

The 2016 show was the only major commercial drone show selected by FAA Chief Michael Huerta as a speaking venue that year.

More than 120 classes, panels and keynotes are presented under Drone TechCon (for drone builders, engineers, OEMs and developers), Drone Enterprise (for enterprise UAV pilots, operators and drone service businesses) and Drone Cinema (for pilots engaged in aerial photography and videography).

“We are very proud of InterDrone and how it has emerged so quickly to be the industry leading event for commercial UAV applications in North America,” said Ted Bahr, President of BZ Media.

He added, “We decided that to take the event to the next level required a company of scale and expertise like Emerald Expositions. We look forward to supporting Emerald through the 2017 and 2018 shows and working together to accelerate the show’s growth under their ownership over the coming years”.

This acquisition is the most recent in a string of them for Emerald, including the CEDIA Expo, American Craft Retailers Expo (“ACRE”), RFID Journal LIVE! Event and National Pavement Expo, to name a few.

Also, according to a January Reuters report, Emerald is rumored to be on the sales block for $2 billion. Loechner declined to comment on the possible sale at the time.

Corporate Solutions, LLC of Westport, Conn., was the exclusive advisor to BZ Media in arranging and negotiating this transaction. The financial terms of the transaction were not disclosed