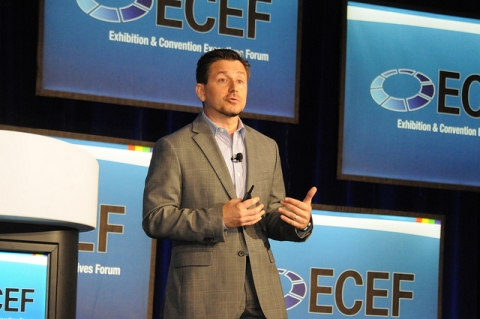 The ballroom at the JW Marriott in Washington, D.C., was filled with the who’s who of the association and for-profit trade show world; all gathered together to take part in the record-breaking 13th edition of the Exhibition & Convention Executives Forum held May 27-28.

Sam Lippman, who is president and founder of Lippman Connects and runs the event, said that the 216 registered attendees were a record, as well as the number of sponsors this year and supporting publications.

“The 13th time is not the curse, it’s the charm!,” Lippman said. “The speakers exceeded all expectations.”

The event kicked off with a welcome reception the night before a packed one-day conference schedule the next day.

After everyone in the room stood and introduced themselves at the conference, the first speaker who took the stage was Greg Topalian, senior vice president of Reed Exhibitions.

His topic was “Avoiding Irrelevance” and he said, “The next generation consumes information differently and consumes data differently.”

Just as Blockbuster video rental chain collapsed in the face of market disruption by Netflix, Topalian cautioned that B2B events must build fan-like loyalty to fend off disruptions.

He also warned about sticking with the same old, same old when it came to exhibitors. “I think the exhibitor experience is the thing we could universally find the most unhappiness with,” he added.

Next up on stage was David Audrain, president and CEO of Exposition Development Company, and Paul St. Amour, vice president of Latin America, who discussed tips on attracting Mexican attendees to U.S. events and taking events down to Mexico.

Both St. Amour and Audrain advised the key to success to taking a show into not only Mexico, but also any country, was to conform to the way of doing business there. For example, shows in Mexico typically are held from 1 p.m. – 8 p.m.

“Don’t just take your American model and plop it down in the marketplace there,” Audrain said.

Joe Loggia, president and CEO of Advanstar Global, talked about his company’s successes and lessons learned while launching its “Shop the Floor”, a 356-day, online fashion marketplace.

“We wanted to communicate on (the buyers and sellers) timeframe, not ours,” Loggia said. “We needed to get a platform that allowed this to happen.”

There were some bumps in the road, including coming to the conclusion they weren’t software developers and needed to bring in a company from the outside, but in the end, there now are 800 brands, 50,000 products and 4,000 buyers who regularly use the site.

After a networking luncheon, the afternoon sessions began with Chris McEntee, executive director and CEO of the American Geophysical Union, gave a presentation about the success her organization has had with its virtual event.

She said, while 23,000 members attended their annual meeting, another two-thirds did not. “We wanted to reach (those) members,” McEntee said. “How can we make this experience more valuable to them?”

And, the virtual event did not cannibalize the live event, in fact attendance the following year at the live event increased 18 percent.

Next up was Gary Shapiro, president and CEO of the Consumer Electronics Association – which owns International CES.

“You learn from your total failures in life,” he told the crowd. “ … I do not understand people who do not have regrets.”

He detailed several lessons CEA learned trying to hold a summer version of the International CES show, including not engaging with the video game sector (which left and launched another association and the massive E3 Expo); opening the show up to the public; and engaging with everyone as order-takers, instead of building relationships.

Shapiro also challenged all show organizers in the audience to come up with “three new major things at every show,” adding that no one wanted to have the dreaded “B” word – boring.

Lastly, Larry Vincent, chief branding officer at the Brand Studio, led a discussion about how businesses should think of their brand as a business strategy, not just image and design.

He used the example of Starbucks and said the company didn’t just create a brand, but an experience every time someone stepped into one of their stores.

“How do you do the same thing with your events?” he asked the audience. “… Experience is the root of great brands.”

To see the Twitter feed for the event and a lot more coverage from the sessions look under hashtag #ECEF or Tweets from TSNN_Rachel.