The exhibition industry continued to grow, albeit modestly, during the third quarter of 2019, according to the Center for Exhibition Industry Research’s quarterly exhibition index report. The CEIR Total Index, which measures exhibition industry performance, posted a year-over-year gain of 0.6 percent even though it underperformed the overall economy as reflected in the inflation-adjusted GDP.

While the trade show industry’s moderate third quarter performance proved to be weaker than the first two quarters of the year, it showed a slight improvement over the same quarter in 2018 when the industry registered an underwhelming year-over-year gain of 0.2 percent.

“The growth of the exhibition industry should pick up the pace moderately during the fourth quarter of the year through the first half of next year despite uncertainties surrounding trade negotiations with China and slowing world economic growth,” said CEIR Economist Allen Shaw, Ph.D., chief economist for Global Economic Consulting Associates. 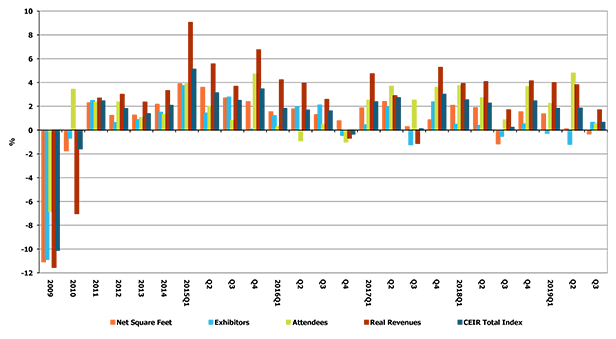 “In line with the macroeconomy, the growth of the exhibition industry has continued but at a slower pace,” said Cathy Breden, CEO of CEIR. “The growth during the first three quarters indicates that the exhibition industry is on track to register a ninth consecutive year of growth, albeit slowing growth as was forecasted by our economist in the 2019 CEIR Index Report.”