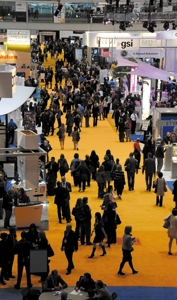 General service contractor Fern Exposition & Event Services bought another GSC, NexxtShow, which will operate as an independent company. Terms of the deal were not disclosed.

He added, “In an industry where business models are forced on customers in the name of productivity or efficiency, both Fern and NexxtShow will continue to deliver customized services and client focused innovative solutions to the market.”

Avon, Mass.-based NexxtShow was formed in 2008 by Mark and Matthew Epstein at “a time of economic downturn and uncertainty to fight against higher tradeshow pricing and shrinking show growth,” according to the company’s Web site.

Mark Epstein previously founded Champion Exposition Services, which Matthew also worked for, and was sold to Freeman two years ago.

“It was the right time for such a move, after having been in the industry for close to 40 years,” said Mark Epstein, NexxtShow’s CEO.

He added, “Aaron brings a fresh and innovative perspective at a time when our clients and the industry are looking for change to deal with escalating costs while at the same time desire higher levels of personalized service and creativity. Aaron and his team are proven leaders, who have admirably operated Fern with positive results for their customers.”

NexxtShow brings several innovations to the table, including the NexxtWall™ system, which is the first full-scale replacement for traditional pipe & drape booth dividers; provides concierge service on the showfloor; and offers simplified, mobile friendly, cloud-based systems for exhibitors and show organizers.

“The industry and our customer’s needs are continuing to evolve at a fast pace,” Bludworth said.

He added, “By adding NexxtShow to the Fern family we are able to support the great achievements that NexxtShow has made in moving the service side of our industry into the future while maintaining the excellence that has kept Fern an industry leader for over a century.”

Freeman bought Cincinnati-based Fern two years ago as part of the Wheelhouse Solutions portfolio (that included Champion) and then sold Fern to Bludworth and an investment group in July of last year.

Fern has core markets in the Midwest and South and 10 shows on the 2012 TSNN Top 250 Trade Show list.

Fern opened its doors more than 100 years ago and now serves 1,000-plus expositions and events held annually throughout the United States and Canada.

Fern also employs nearly 200 full-time employees, as well as part-time workers and contractors for shows and has eight offices.

NexxtShow has serviced clients such as the American Academy of Audiology’s show, AudiologyNow!, which ranked No. 194 on the 2012 TSNN Top 250.