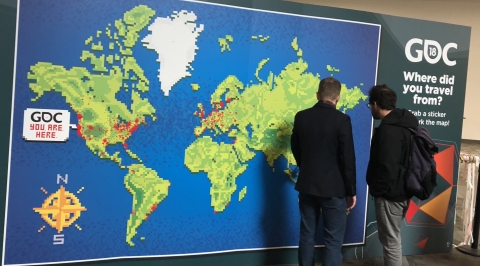 In its 26thyear, UBM Tech’s Game Developers Conference just keeps getting bigger and better than ever, with a record-breaking 28,000 attendees checking out the packed showfloor March 19-23 at San Francisco’s Moscone Center.

The event, billed as “the world’s largest and longest-running event serving professionals dedicated to the art and science of making games,” also had approximately 500 exhibitors and plenty of new bells and whistles to excite and engage attendees this year.

“GDC really is about the business of making games,” said GDC’s Katie Stern, who oversees the show. “The typical attendee is not just developers, it’s visual artists, writers, music and business folks. Really, the full eco-system.”

She added that this year there was a major focus to examine the way things may have been done in the past at the show and find out from attendees what they felt needed to be improved.

“We wanted to revitalize it a little,” Stern said.

A post-show survey was sent out after the 2017 event and attendees pointed to a few things that needed a refresh, such as they had difficulty navigating the show with Moscone split into a few different buildings and the pass structure for the show was complicated.

This year presented even more of a challenge with a portion of the venue under major construction.

As a result, there were fewer meter boards and other traditional signage, and more things were up off the floor so they were visible from various viewpoints. The pass structure also was streamlined so that attendees could more clearly choose a pass for what they needed to accomplish.

In addition, new elements to the show were introduced such as the GDC pixelated festival map that was a fun way to show where everything was being held.

There also was another huge map of the world at which people could grab a red sticker and post where they were visiting the show from, displaying for all to see just how international GDC really is – 32 percent of attendees come from outside of the United States.

Stern said of the showfloor that was filled with all kinds of games, AR and VR, among a myriad of other gaming products, “We have had really good traffic patterns and density all week throughout the entire hall.”

She added that the largest growth segment at the show were independent developers and non-gaming companies, like Uber, who developers may work for when they are getting their feet on the ground in the gaming business.

Besides the showfloor, there also are 500 education sessions, as well as plenty of opportunities to network like at the Independent Games Festival (IGF) Awards and Game Developers Choice Awards (GDCA) and business matchmaking also was available.

“True to its name, the Game Developers Conference is an event for everyone in the games industry, from the aspiring game makers in the indie showcases, to the legendary creators in the classic games post-mortems and everyone in-between,” Stern said.

She added, “It also helps spotlight the best games of the year, the most promising indie teams, the most advanced technology, and the most pressing social issues as reflected by the industry as a whole.”

2015 International CES Draws Record-breaking 176,676 Attendees; Institutes Measures to Cap 2016 Attendance
After conducting an official attendance audit, the Consumer Electronics Association released final numbers for the 2015 International CES, with a record-breaking 176,176…
Yarn Expo Autumn Draws in Record-breaking 500-plus Exhibitors
From Oct. 15-17, more than 500 exhibitors from 14 countries & regions showcased an a range of yarn & fibre products in hall 8.1 at the National Exhibition and…
UBM’s 2016 Game Developers Conference Scores Record-setting Performance
UBM Game Network's 2016 Game Developers Conference, an event serving professionals dedicated to the art and science of making games, has set a record for event attendance,…
5 Amazing Things to Do in San Francisco
Sponsored Exclusively by Visit California A lifetime in San Francisco wouldn’t be enough to see the city’s countless wonders. That’s why we’ve selected experiences that…
Vitafoods Asia Draws 2,345 Attendees to Hong Kong
The fifth edition of Vitafoods Asia, the only event dedicated to the nutraceutical, functional food and beverages and dietary supplement industries in Asia, attracted 2,345…
Baltimore Draws 25,000 Attendees to Natural Products Expo East
For its 30th show, New Hope Natural Media’s Natural Products Expo East show not only attracted 25,000 attendees to the Baltimore (Md.) Convention Center, but also 1,363…