Gen Con to Remain in Indianapolis Through 2021 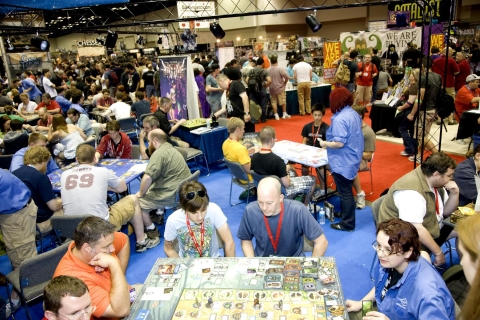 The one-year extension agreement also allows the show to renew its contract on an annual basis, according to city officials.

“Indianapolis has warmly welcomed Gen Con with its Hoosier hospitality for more than a decade, and we appreciate the city’s commitment to making all of our guests feel at home,” said Adrian Swartout, Gen Con CEO and owner of the show. “With Gen Con approaching its 50th convention in 2017, we look forward to celebrating many more historic years in Indy, as well as serving as a hub for a thriving community of Hoosier gamers.”

“The City of Indianapolis is proud to be the home of Gen Con, and we are appreciative of their continued commitment to our great city,” said Indianapolis Mayor Joe Hogsett. “This iconic event draws gamers from around the globe, and we look forward to welcoming them year after year with the Hoosier hospitality that we are so well known for.”

“Gen Con generates an estimated $72 million in economic impact for our region annually, while transforming downtown Indianapolis into the global epicenter of hobby gaming for nearly a full week each year,” said Leonard Hoops, Visit Indy president and CEO.

He added, “Visit Indy, the staffs of the Indiana Convention Center and Lucas Oil Stadium, our hotel partners, and so many others in Central Indiana’s hospitality community are delighted to have played a role in Gen Con’s growth and success over the past 13 years and we look forward to continuing our mutually beneficial partnership through 2021 and beyond.”

ASAE Meetings and Events Will Be Hosted Virtually Through February 2021
Due to continued concerns for the health and safety of its members, industry partners, volunteer leaders, staff and other stakeholders during the COVID-19 pandemic, the…
Sweets & Snacks Expo Moving to Indianapolis for 2021; Back to Chicago in 2022
The National Confectioners Association will move Sweets & Snacks Expo, which has taken place in Chicago every spring in its 23-year history (except for 2020, which was…
How to Plan Events for Gen Z
Millennials have been the focus of research and event marketing (including ours) for years now, and there are new articles (either praising or criticizing the generation…
UFI Report: Global Exhibition Industry Remains Stable
UFI, the Global Association for the Exhibition Industry, has released the latest edition of its flagship Global Barometer research, taking the pulse of the industry. One of…
Capture & Engage Gen Y/Millennial Meeting Goers with Technology
For trade show and conference planners looking to capture and engage more Generation Y/Millennial attendees, accommodating their technology needs to be a top priority. These…
Gen X and Millennials: Reaching Both Generations at Your Exhibit
In this age of big data, it’s valuable to remember that reaching customers can be an art as well as a science. Which means we should use science to support our exhibit…