Global Pet Expo Breaks Records Across the Board 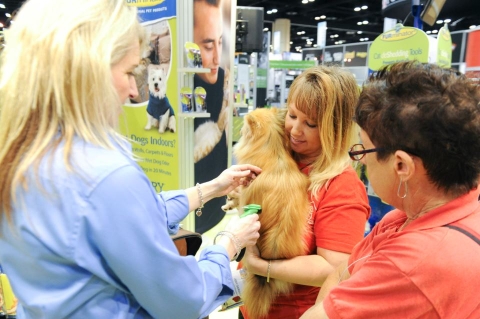 There’s no question that people love their pets, especially taking into account the record-breaking show numbers that recently were revealed for the American Pet Products Association’s  and the Pet Industry Distributors Association’s Global Pet Expo 2013.

The pet industry itself is going gangbusters with record-breaking numbers and results from APPA’s latest Survey showing pet ownership is at an all-time high.

“There’s no arguing that this industry continues to grow and there’s certainly no better place than at Global Pet Expo for exhibitors to showcase their products and give thousands of buyers from around the world a first look,” said Andrew Darmohraj, APPA senior vice president and trade show director.

He added, “We’d truly like to thank all the buyers, exhibitors and media who participated in this year’s show making this our largest event to date.”

The show also featured more product launches than it’s ever had before, with 900 entries into the New Products Showcase alone.

“The 3,000 new product launches at this year’s show included advances in technology, like self-cleaning fish tanks and pet doors you can control from your smart phone, as well as advances in enrichment products from tennis ball cannons to ice cube vitamin supplement kits,” Darmohraj said.

He added, “Whether you’ve been in this industry for years and have dozens of products or you are just starting out with a single product launch, Global Pet Expo is a must attend event.”

One key reason for the growth was there was a strong international presence. On the showfloor, there were 172 international exhibitors, up from 145 in 2012. In addition, 27 percent of the attendees were international buyers that represented 71 countries.

Global Pet Expo’s YouTube channel has shown the biggest increase, with more than 29,000 views, up 58 percent from the 2012 show.

IMEX America Breaks Records Across the Board in Las Vegas
As the 5th IMEX America wrapped up in Las Vegas, records were broken across the board, with a total of 3,100 companies representing 150 countries exhibiting, including 80 new…
Global Gaming Expo Asia 2014 Breaks Records with Largest Event to Date
Global Gaming Expo Asia (G2E Asia) 2014, organized by the American Gaming Association and Reed Exhibitions, was a major success in its eighth year. The event saw a record-…
China International Pet Show Breaks Records in Beijing
The 18th China International Pet Show (CIPS) – a trade fair in Asia for pet supplies and aquarium products broke new records when it ran recently in Beijing: 946 exhibitors…
China International Pet Show on Track to Break Exhibitor Records in November
Everything for pets is on show in the New China International Exhibition Center in Peking, where the 18th China International Pet Show (CIPS) will take place Nov. 17-20.…
ASAE’s Technology Conference & Expo Breaks Attendance Records
When 1,292 attendees came to the 10th Technology Conference & Expo, held by the American Society of Association Executives Dec. 14-16 at the Gaylord National Resort…
Asian Attractions Expo 2016 Breaks Attendance Records in Shanghai
Based on preliminary results, Asian Attractions Expo (AAE) 2016 attracted a record-breaking 11,500 total participants, including 8,100…