Here’s How You Can Help the Australia Fire Relief Effort 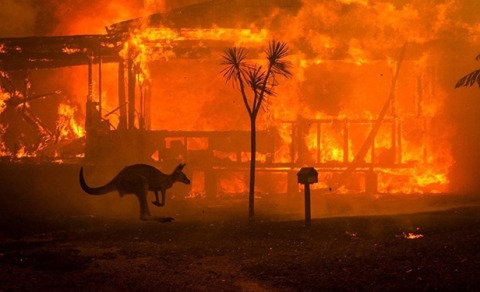 By now you’ve likely read the news reports and seen the photos. Australia is being ravaged by the worst wildfires the country has seen in decades, with many areas devastated since the fires began in September of last year. Record-breaking temperatures, months of severe drought and strong winds have fueled a series of massive bushfires across the country that have torn through bushland, mountain forests and national parks. At least 24 people have died nationwide.

According to local news reports, more than 24 million acres have been burned, and even with firefighting assistance from countries including the U.S., state and federal authorities are struggling to contain the massive fires. In New South Wales alone – the state hit the hardest by the fires – approximately 130 blazes were burning as of Jan. 6, destroying more than 1,300 houses and forcing thousands to evacuate.

Some of Australia’s largest cities, including Melbourne and Sydney, have also been impacted. Fires have damaged homes in the outer suburbs and thick plumes of smoke have blanketed the skies, making the air practically unbreathable.

But it isn’t only humans that have been impacted by this tragedy. As many as 1 billion animals have been killed by the fires, according to University of Sydney ecologists. To make matters worse, Australia is only now entering its summer season, with temperatures expected to peak in January and February — meaning relief could be months away.

The situation is dire and heartbreaking. So what can you do? Join your fellow event professionals by donating funds to the organizations working toward bushfire response and victim relief and recovery, including a Facebook fundraising campaign started by Australia-based Info Salons Group. A Freeman company, Info Salons provides event technology solutions for online and on-site registration, data tracking and capture for the exhibition and events industry throughout Greater Asia.

“Australia has been home base to Info Salons for 30 years,” Kelleway said. “Our beautiful country and wildlife are burning out of control. The fires are not abating with no rain forecasted and temperatures set to rise with gale force winds making it impossible for our firefighters.”

She continued, “We desperately need funds to rent large bomber planes to continuously dump water along the fire-lines that literally spread around the perimeter of Australia. We don’t want to lose this beautiful, natural country that we call home.”

Other Australia-based organizations you can support, as recommended by Tourism Australia officials, include:

To help support wildlife rescue and treatment, you can donate to groups such as:

“Tourism and business events are a significant driver of Australia’s economy, and one of the ways companies can help support our communities during this time is to continue to bring their events to Australia,” said Phillipa Harrison, managing director for Tourism Australia. “Many areas [of the country] are unaffected [by the fires], and most business events operators are open and ready to welcome visitors. Those affected by bushfires will benefit greatly from visitation when the time is right.”

Technological Tools Can Help Rebuild Exhibitor Confidence — Here’s How
With the COVID-19 situation thankfully now appearing to improve in a number of locations and a return to trade shows on the horizon, it’s a critical time for event profs…
How a Green Team Can Help You Plan More Sustainable Events
Sustainable practices are fast becoming a must for events. According to the Eventbrite 2020 Event Trends report, 59 percent of North American event professionals are taking…
Small Booth? Here's How You Can Still Win Big at Your Next Trade Show
Trade show professionals know that bigger booths tend to grab the most attention from attendees. A bigger booth means that massive creative displays can be set up, so…
The Trade-Show Industry Can Get Greener! Here’s How…
My company has been providing shipping and transport cases for the trade show industry for many years. As such, we’ve operated out on the periphery, which has given us a…
How to Join the Nashville Convention Center Authority’s Tornado Relief Effort
In the wake of sudden, severe storms that caused a series of devastating tornados to slam through Nashville and greater middle Tennessee in the early hours of March 3, the…
Lift As You Climb: How the Events Industry Can Support Social Justice
Diversity at events encompasses more than just race and ethnicity. It includes people of different generations, physical abilities, genders, education levels and more. When…