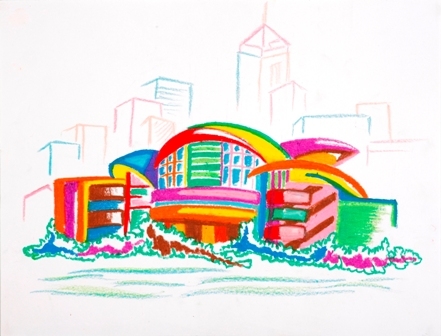 The Hong Kong Convention & Exhibition Centre held its first-ever drawing competition - “A Landmark for Success Drawing Competition 2012” – in which 16 young primary and secondary school students received prizes at an Award Presentation Ceremony for their submissions.

The purpose of the drawing competition was to give local school students the chance to visit the HKCEC and, by looking at its architecture and interior design from an artistic perspective, learn more about how it contributes to Hong Kong’s economy, according to venue officials.

Millions of visitors visit the HKCEC every year for exhibitions and other events.

“The rich imagination, creativity and drawing skills of the students amazed me and the other judges too,” said Cliff Wallace, managing director of HML, which oversees the center.

He added, “Back on March 3, every student was given the same presentation and was shown just a few photos of the HKCEC, and then invited to share with us how they saw the HKCEC from their own unique perspective. The outcome was a superb array of creative sketches and views, testifying to the artistic talent of the young people”.

A total of 126 students aged from 10 to 15 from 11 neighboring schools participated in the drawing competition.

On the day of the Competition, the students were shown facilities not normally open to the public at the HKCEC, such as reporter rooms and the VIP Lounge inside the Grand Hall, the venue for the 1997 Handover ceremony.

They also were presented with some lesser-known information about the HKCEC.

Following the site tour, the students were given 90 minutes to draw the HKCEC in any way they liked.

Some were inspired by what they saw and heard during the site tour, while others sketched their own versions of what they thought the HKCEC should look like.

According to venue officials, millions of local and overseas visitors attending events at the HKCEC will have the chance to appreciate these art works by these talented young artists.