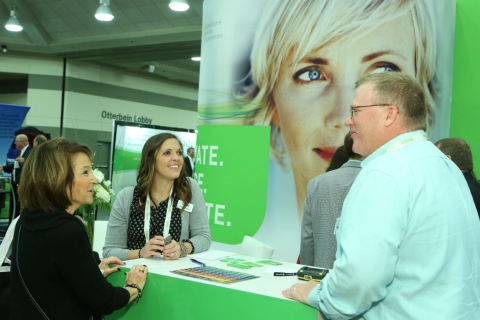 “Charm City” lived up to its name, and then some, when more than 2,500 attendees flocked to Baltimore, Md., last week for the International Association of Exhibitions’ Expo! Expo! Annual  Meeting & Exhibition 2015.

David DuBois, IAEE’s president and CEO, said that while the attendee numbers were unaudited at this time, they definitely broke records, with a 10-percent uptick, compared with last year’s event in Los Angeles.

“It’s the biggest one ever,” he added. “Being located in the Mid-Atlantic region brought in a lot of organizers from the Northeast and the D.C./Maryland/Virginia area. People really loved (Baltimore).”

Besides all-time high attendance, the showfloor at the Baltimore Convention Center also broke records, with 269 companies on a 41,000 net square foot showfloor.

“Hosting IAEE was a great opportunity for the City to showcase our compact convention campus and the value and attendee experiences afforded to both planners and attendees,” said Tom Noonan, president and CEO, Visit Baltimore.

He added, “Our congratulations go to the entire IAEE team for a record-breaking event in Baltimore. We were proud to partner with them and our Synchronicities partners, Anaheim and San Antonio, and look forwarding to continuing that partnership through 2017.”

Baltimore was the first part of a three-city stint for Expo! Expo! that next will go to Anaheim in 2016 and San Antonio, Texas, in 2017.

The event, which ran Dec. 1-3, was filled with networking and educational opportunities, including the annual joint session with IAEE and the Society of Independent Show Organizers.

This year’s session focused on key legal issues impacting the trade show industry, including hotel contracts, W-Fi and employees that are contractors.

Attorney Mark Roysner advised the audience of C-level show organizers to not sign hotel contracts at the same time as a venue contract that might be for a show that’s still 3-5 years out. “You could very quickly after 3-5 years turn out upside down,” he added.

After the joint session, all of the IAEE attendees headed into the IAEE opening session that featured a keynote by Baltimore native and author Wes Moore.

“You have no idea how much your selection of Baltimore means,” Moore said. “We’re proud of our city and we’re proud to share it with the world.”

Baltimore Mayor Stephanie Rawlings-Blake was next on stage and read a proclamation naming Dec. 1-3 Exhibtions and Events Week during the event.

The rest of the first day entailed the showfloor opening up to a aisles filled with attendees checking out all of the latest offerings, as well as the opening party at the Maryland Science Center later that evening.

The next morning was another keynote with Porter Gale, former vice president of marketing for Virgin America, as well as a morning filled with education sessions ranging from building a successful sponsorship program to maximizing attendance at events.

The showfloor opened once again and was even busier than the day before with attendees packing the booths to check out new technology, such as Experient’s eventBit and a2z, Inc.’s new Connect program, as well as destination offerings from places as far away as Singapore.

That evening, the annual Humanity Rocks: Celebration with a Cause, was held and the next day at the awards luncheon it was revealed that $21,500 was raised for the United Way of Central Baltimore and OneBaltimore, which was another record set at the event.

Also during the luncheon IAEE’s individual award winners were recognized, including Tony Lee, President and CEO of Tony Lee International, who received the Distinguished Service Award.

As her final act as the current IAEE chair, Megan Tanel passed the gavel to Julie Ward Smith, who will now serve until next year’s annual meeting.

“I have such a passion for this business …,” Smith said. “It’s certainly never boring and ever-changing.”

She asked the audience in joining her in focusing on three key issues: Talent Development, Review of Pay Practices and Volunteerism. Smith also encouraged everyone to get involved as an IAEE member and challenged them all: “How do we drive the change?”

As a big surprise during the luncheon, Tanel also presented Cathy Breden, IAEE's COO, with the Chairperson's Award. it was a well-kept secret within the IAEE organization, according to Tanel.

"Seriously, this is really very special," Breden said. "This career has given me so much more back than I have given."