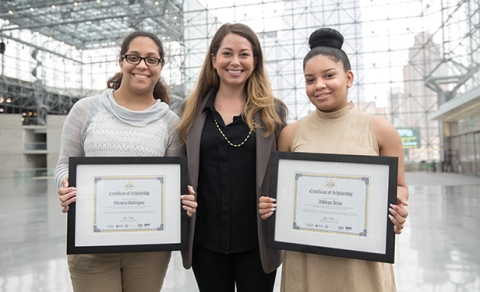 Javits Center has expanded and extended its Javits Juniors Scholarship Program, designed to support the higher education of local high school students while encouraging them to seek ways of improving their community through public service and innovative thinking.

Now in its second year, the program will award five $5,000 college scholarships to three students at Urban Assembly School of Design and Construction and two students at High School of Fashion Industries, both located on Manhattan’s West Side.

“These scholarships have a tremendous impact on the future of these students, and we are thrilled to see the number of scholarships expand this year,” said Alan Steel, president and CEO of New York Convention Center Operating Corporation, which runs Javits Center.

He continued, “Our mission is to support New York’s economy, but we are very proud to work with the Foundation and all of our industry colleagues to support the state’s next generation of leaders and continue to honor the legacy of our namesake, the legendary Senator Javits.”

The program’s $25,000 in funds come from the Marian B. and Jacob K. Javits Foundation, along with $5,000 in donations each from three event industry producers: Emerald Expositions, Informa and Reed Exhibitions.

Eligible to all senior students at the two participating schools, the scholarship program is being coordinated through the Fund for Public Schools, a non-profit organization dedicated to supporting the New York City’s public schools, and the New York City Department of Education.

To be considered for the program, students must write an essay with the theme “Serving New York” that outlines public policy ideas capable of better serving the general public and improving the quality of life for New Yorkers, as well as the reasons behind their goals and how they plan to achieve them.

Due at the end of April, essays will be reviewed by a selection committee comprising members from the Javits Center, the Marian B. and Jacob K. Javits Foundation and the participating schools, which will choose five students who will each be awarded a $5,000 scholarship to the college or university of their choice.

“The events industry plays a critical role in supporting so many of New York’s industries, and we are happy to extend that support to those who need it most – the next generation of planners and thinkers who will improve the world around them,” said Michael Grant, senior vice president of the Operations Group at Reed Exhibitions.

The winning essays will be chosen in May and an official announcement will take place during a special ceremony on June 5, according to Javits officials.

The scholarship program is coordinated through the Javits Juniors program at the Javits Center, which regularly provides local students and community groups with educational tours during which students learn about the career of Senator Javits; the mission and operations of the convention center; the importance of public service and the impact of the events industry on the region’s economy.

“We are so pleased to see this program continue and inspire others to contribute to the goal of helping these students achieve their dreams, both in education and in life,” said Carla Javits, founding member of the Marian B. and Jacob K. Javits Foundation and daughter of Senator Javits, who passed away in 1986 following a storied career as New York State Attorney General, U.S. Congressman and U.S. Senator.

She continued, “As the son of immigrants who was born and raised on the Lower East Side, my father believed strongly in the power of public and private partnerships, as well as education, and this program captures the essence of his beliefs.”

Javits Center Rolls Out Reshaped F&B Program to Complement 2021 Expansion
With the goal of reshaping the food and beverage industry for meetings and conferences, New York Convention Center Operation Corporation (which operates Javits Center) has…
Newly Expanded Javits Center Reopens to Full Capacity With NY NOW Show
Life at one of the busiest convention centers in the U.S. has been anything but idle over the past 18 months of the COVID-19 pandemic. New York City’s Javits Center closed…
World Trade Center Las Vegas Continues to Expand Its Global Business Partnerships
In a continuing effort to enhance its international business relationships, World Trade Center Las Vegas recently signed three Memorandums of Understanding (MOU) at the…
Meet AC Expands Its Virtual Reality Experience Platform
In January of this year, Meet AC unveiled a new virtual reality (VR) experience that enables event planners, brands and prospective visitors to experience everything Atlantic…
Javits Center Surpasses 250,000 Vaccinations in Major Milestone
On March 24, New York’s Javits Center hit an important milestone for the health of its community. Since opening its doors on Jan. 13 as a mass COVID-19 vaccination site, the…
Javits Center Opens Green Roof for Summer Tours
Imagine you’re at a large trade show in a giant convention center among throngs of people and you’re starting to feel tired and stressed. Instead of just grinning and…