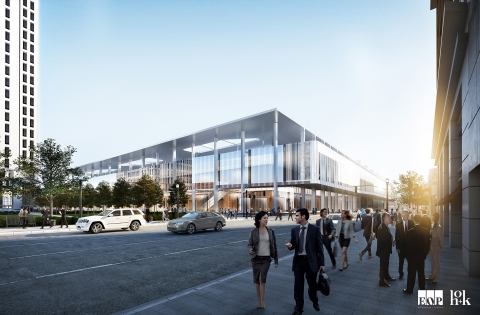 “The improvements for the Kentucky International Convention Center are very important to downtown Louisville and the many businesses that depend upon conventions in this city,” Beshear said.

He added, “This work will result in an annual economic impact of more than $50 million and will help retain current business and attract new conventions to Kentucky. Tourism is a major industry in our state with an economic impact of $13.1 billion last year.”

The renovation and expansion project is set to begin in August 2016, with a completion date of summer 2018. Lexington-based EOP Architects and Kansas City-based HOK worked together to create the design.

The expansion of the convention center will increase contiguous exhibit space by more than a third, from 146,000 square feet to over 200,000 square feet, and will add a 40,000-plus square foot ballroom all within the center’s existing footprint. The project also includes renovation of meeting rooms in the facility.

The center’s new design will improve navigation and pedestrian flow through the building as well as improve the exterior of the building, emphasize entrances and enhance meeting rooms.

Designed and constructed as a sustainable project, the design promotes energy and water conservation. The project will pursue the U.S. Green Building Council’s LEED (Leadership in Energy and Environmental Design) Silver Certification.

Louisville is unique in that it has two convention venues, an arena, a downtown pedestrian skywalk and 17,000 hotel rooms in the metro area. The city hosts five of the country’s largest trade shows on the 2014 TSNN Top 250 trade show list. By 2018, additional hotel rooms will bring 18,000 rooms to the Louisville area.

“The redesigned center will allow us to compete for more convention business, which helps support existing jobs and creates new ones,” Mayor Fischer said

He added, “Combined with the Omni development, the bourbonism boom and the other new hotels, this convention center will add even more vitality to our vibrant downtown.”

Events already are scheduled for the newly renovated convention center. Sweet Adelines International will bring its 2020 convention and 10,000 attendees to Louisville, in part because of the new exhibit space and increased number of hotel rooms downtown.

Also booked for the expanded convention center is the National Association for College Admission Counseling for 2019.

“For many convention attendees, they will spend a lot of time in these walls. It is important that the iconography in the convention center is in line with Louisville’s brand, promoting all of the things that make this city great. We hope this will inspire them to return time and time again,” said Karen Williams, president and CEO of the Louisville Convention & Visitors Bureau.

During the last five years, the economic impact from tourism in Kentucky has increased by more than $2.2 billion to $13.1 billion.

The industry has added 13,000 jobs and now supports 180,000 jobs statewide.  These jobs generated more than $2.9 billion in wages for Kentucky workers, an increase of nearly $123 million from the previous year.