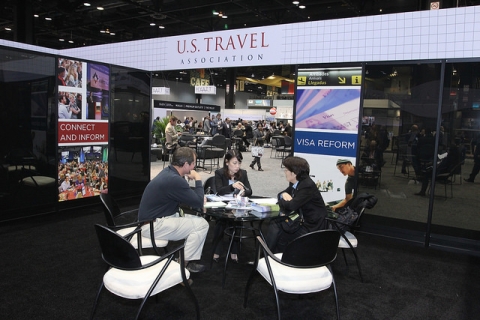 Las Vegas will once again host the largest travel trade show in North America in 2020, the U.S. Travel Association’s IPW.

IPW is the travel industry’s premier international marketplace and the largest generator of travel to the U.S.

"IPW is a tremendous opportunity to showcase Las Vegas to the world and there is always something new to experience," said Lawrence Weekly, Clark County Commissioner and Chairman of the LVCVA Board of Directors.

He added. "Since the show was last here just two years ago, we’ve seen new resorts open like the SLS Las Vegas, The Cromwell and The Delano, new attractions like the High Roller Observation Wheel, the LINQ Entertainment District and SlotZilla Zipline in Downtown Las Vegas just to name a few.  In addition, there are major projects under construction, including the 20,000-seat arena from MGM and AEG and Resorts World Las Vegas.  There is always something new to see and do in Las Vegas and that’s what makes us so dynamic and energetic."

As the host city for IPW, Las Vegas receives exposure with travel buyers from across the globe. Las Vegas is a key destination for international visitors, which represent nearly 20 percent of the more than 41 million travelers to Southern Nevada in 2014.

U.S. Travel estimated the event would generate more than $3.5 billion in future travel to the U.S., with an estimated $350 million of that coming to Las Vegas.

U.S. Travel Association recently announced future host cities through 2024.  After Las Vegas, IPW heads to Chicago in 2021, Orlando in 2022, San Antonio will host for the first time in 2023 and Los Angeles is tapped for 2024.

Industry Veterans to Host Pop-Up Food Drive for Las Vegas Event Workers
If there’s one thing that the live events industry has continued to demonstrate over the course of its history, it’s an open-hearted willingness to help its own, particularly…
Las Vegas to Host First U.S. Edition of UFI Global Congress in 2023
UFI, the Global Association of the Exhibition Industry, unveiled plans to hold the 90th UFI Global Congress in Las Vegas, Nov. 1 – 4, 2023. It will be the first time the…
Las Vegas CC Will Once Again Host Four Largest Citywide Shows in 2015
Four of Las Vegas’ largest trade shows, including No. 1 International CES®, No. 2 SEMA Show, No. 8 World of Concrete Exposition and No. 9 ASD LV will return to the Las Vegas…
Las Vegas Market to Host 8th Annual Gift For Life Fundraiser
International Market Centers is gearing up to host its 8thannual “Up On the Roof” gala charity event during the Summer 2018 Las Vegas Market, running July 29-Aug. 2.  Set…
Cosmoprof North America Boasts a Record Event in Las Vegas
Cosmoprof North America, the annual trade show and conference for beauty professionals, saw growth across all categories at its 2014 event that took place July 13-15 at…
IPW Will Collocate With Connect Travel Events in 2021
The U.S Travel Association has agreed to partner with Connect Travel for a multi-event trade show in Las Vegas, set for Sept. 12-22, 2021. The centerpiece of the event will…