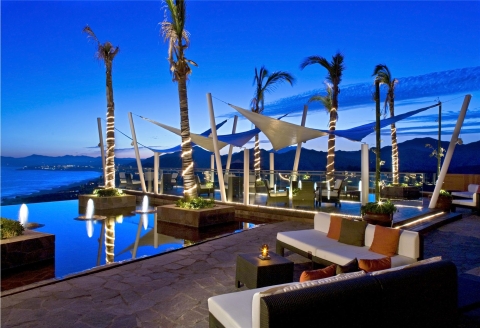 A giant logo of Sony PlayStation is projected onto the terracotta wall of The Westin Resort and Spa Los Cabos, Mexico. The Sea of Cortez rushes against the shore in the background. Tomorrow, some 200 game developers will descend onto this luxury resort to show off their ideas, compete in “Olympics” on the private beach and talk geek over flaming margaritas.

“We’re back at pre-recession levels,” said Edward Burgos, tour and sales travel manager at the property. “Meetings are up and so is our incentive business.”

Along with the improving economic situation and ease of access from the U.S., Burgos is quoting the celebrity factor as one of the driving forces. “Celebrities like that it’s still very private here. We’ve had several high-profile weddings,” he said.

The Westin Los Cabos overlooks a private golf course where reportedly George Clooney and Michael Jordan have oceanfront homes. The 243-room hotel fits right in with the high-end atmosphere. Blending modern architecture and traditional Mexican elements, it feels like a glamorous retreat with its infinity pools and mango wraps at the spa.

The resort offers 11,900 square feet of indoor function space, but the real jewels here are outdoor areas, including a 3,500 sq. ft terrace with a fire pit. Meeting rooms open onto a green oasis that is often transformed into an outdoor meeting space or reception area under the stars. A workshop here sure beats an air-conditioned ballroom.

Over roasted sea bass filets at the Arrecifex restaurant nested in the rocks surrounding the resort, Burgos says that another trend they’re seeing is the growth of the all-inclusive segment for both individual travelers and groups. “Planners want to know what their final costs are. It’s about peace of mind,” he said.

Fast and reliable access to Internet, a seeming staple by now, is also a top priority for planners. The hotel offers Wi-Fi throughout and works with groups if they have special requirements for connectivity.

For most Americans though, the trick also is to turn off the mobile data on their phone so that it only connects to the hotel’s Wi-Fi and doesn’t rake in hundreds of dollars in data charges. If that happens, most carriers will send warning emails. But don’t panic. Sometimes it’s possible to negotiate a retrograde international data plan that reduces your costs down to a manageable sum.

When asked about meeting trends, Group and Conventions Sales Manager Jayson Stirrup said, “We had a group recently that incorporate exercise equipment in their meeting space, and people would jump on the bike and get their blood flowing. But that’s more of a Latin thing.”

On a larger scale, sustainability continues to be an important point both for groups and for the property. He said, “We participate in Sheraton’s carbon offset program and we’re prepared to work with companies that invest in carbon credits. We provide detailed reports and engage in practices that help companies keep their sustainability commitments.”

Another trend that Stirrup is noticing is companies allowing attendees more free time to relax and explore the resort.  “It seems to be driven by customer feedback,” he said. “Instead of endless activities, companies are warming up to the idea of giving attendees a whole day off and do a working dinner.”

Ten minutes from Sheraton Hacienda, the Los Cabos Convention Center is open for business. The 274,000 sq. ft. facility hosted the 2012 G-20 Summit and features a spectacular “living” wall, among other sustainable features.

“Los Cabos is a trending destination for the West Coast but for East Coast travelers, this is still a relatively new, fresh, exciting and appealing destination,” Stirrup said. “As more flights are introduced from East Coast hubs, Los Cabos will become more popular.”