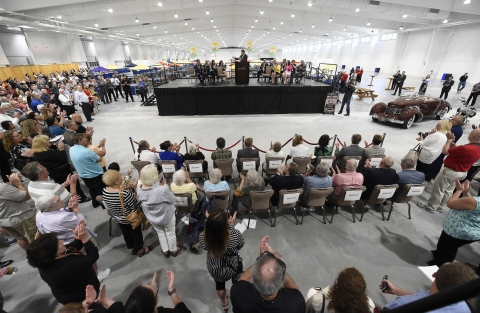 The new center already is making a name for itself as it makes Mohegan Sun home to one of the largest and most attractive exposition sites in the Northeast, with more than 275,000 square feet of flexible meeting and event space.

“We are honored to have you all with us and are excited to be here today to celebrate the grand opening of the new Earth Expo & Convention Center,” said Mohegan Tribal Chairman, Kevin Brown “Red Eagle.”

He added, “While we have hosted many openings in our 22-year history, today’s is equally, if not more important, as it symbolizes our commitment and dedication to our flagship property, our employees, Southeastern Connecticut and the state as a whole.”

Now boasting as the Northeast’s premiere destination for exposition and meeting facilities, the Earth Expo & Convention Center at Mohegan Sun offers a convenient location between New York City and Boston, with efficient, hassle-free accessibility from anywhere within New England and surrounding metropolitan cities.

Easily reachable by toll-free interstate driving, the Earth Expo & Convention Center is just more than an hour from both T.F. Green and Bradley airports with transportation by Mohegan Sun’s shuttle service, and only 20 minutes from the New London Amtrak station by way of car service, taxi or Uber.

He added, “From gaming and concerts to corporate meetings and massive trade shows, our priority is to enhance guest experiences and add value with every visit, creating a lifetime of memories while solidifying customer retention for years to come.”

The floor-to-ceiling windows and doors lead visitors to an outdoor patio which provides added gathering space in warm weather.

Additional highlights of the new Earth Expo & Convention Center at Mohegan Sun include:

He added, “The large size and scope of the new exposition center expands Mohegan Sun’s trade show offerings with increased capacity for guests and with that, we look forward to welcoming thousands of guests during the four-day Barrett-Jackson car auction this month.”

For conferences and events of epic proportions, Mohegan Sun also is home to the Sky Convention Center featuring a 38,000 square-foot Uncas Ballroom, 14,000 square feet of pre-function space and 30 flexible and strikingly-designed individual meeting rooms, accommodating up to 5,300 people.