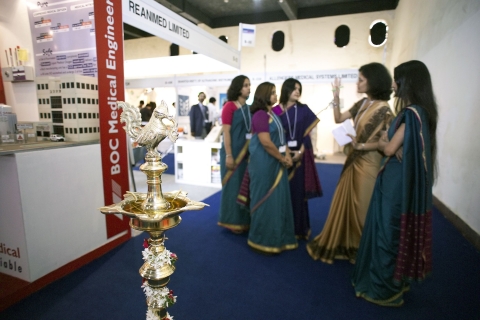 After its most successful staging ever in 2013, there is a positive outlook for the 20th MEDICAL FAIR INDIA – India’s No. 1 Trade Fair for Hospitals, Health Centers and Clinics, to be held March 14-16 at the Bombay Convention & Exhibition Centre.

Two factors are responsible for the growing success of MEDICAL FAIR INDIA: The close cooperation with MEDICA (the world’s largest medical trade fair held annually in Düsseldorf, Germany) and the fact that the Indian health care sector is one of the fastest-growing service sectors, according to show organizers.

The sector already contributes 6 percent to the Gross National Product, according to the Indo-German Chamber of Commerce.

Studies show that the Indian health care market will grow to US$ 100 million by 2015 and the growth rate is expected to amount to 20% annually.

MEDICAL FAIR INDIA is held every year alternately in Mumbai or New Delhi, presenting the latest developments for the medical sector, ranging from medical, diagnostics and laboratory equipment to pathology and physiotherapy technology as well as hospital/clinic furnishings and communication/information technology.

A special feature at MEDICAL FAIR INDIA 2014 will be the U.S. Pavilion, organized for the second time by Messe Düsseldorf North America.

This U.S. Pavilion provides a cost-effective means for companies to enter into or to expand their business in the lucrative Indian marketplace, according to show organizers.

The all-inclusive turnkey package includes a fully furnished booth, access to the pavilion’s exhibitor lounge area with daily snack and beverage service and the on-site services of a project manager.

In addition to its continuing rise in exhibition space, exhibitor and visitor numbers, MEDICAL FAIR INDIA has also succeeded in further expanding its well-established position as the most important international medical event for the Indian market over the past few years.