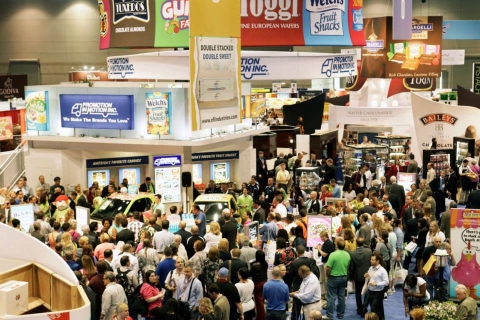 The National Confectioners Association’s Sweets & Snacks Expo, held May 21-23 at Chicago’s McCormick Place, not only snagged a 10-percent increase in attendees, but also the number of new exhibitors rose 17 percent and the showfloor grew 9 percent, compared with the 2012 event.

“For the fourth year in a row, the Expo demonstrated significant growth in all areas. Our 10- percent increase in overall Expo registration is an accomplishment we relish,” said NCA President Larry Graham.

He added, “In a challenging economy, it is apparent by the continued growth that our event provides vital tools, insights, innovations and resources that the industry values.”

International attendees also saw a big boost, with a double-digit uptick coming from more than 90 countries.

“NCA recognizes the power of U.S. brands around the world and we feel the 2013 Expo successfully positioned itself as a destination for world markets to come together,” Graham said.

He added, “We plan to continue expanding our global efforts and outreach for future shows by partnering with firms including Planet Retail and Euromonitor.”

The Most Innovative New Product Awards showcase saw a 17-percent increase in entries, with more than 2,000, that were whittled down and voted on by 2,000-plus retailer ballots.

“This demonstrates how manufacturers see the Sweets & Snacks Expo as a vital vehicle in promoting and sharing product innovation within the candy and snack industry,” said Tim Quinn, vice president Trade Development of Mars Chocolate North America and Expo chairman.

Other highlights from the show included keynote sessions featured from Duke University’s “Coach K” about the value of leadership and teamwork, as well as Pulitzer-prizing-winning columnist George Will’s assessment of how politics affect your business.

The sold-out Gourmet Showcase also featured a ‘Taste of Gourmet’ area, showcasing artisans conducting upscale pairings and demonstrations throughout the show, and for the third year, startups showed off their wares in the Innovation Alley area.

The show’s social media presence also grew, with its official Facebook page seeing a 38-percent increase in ‘likes’ and the event app being downloaded by several thousand attendees.