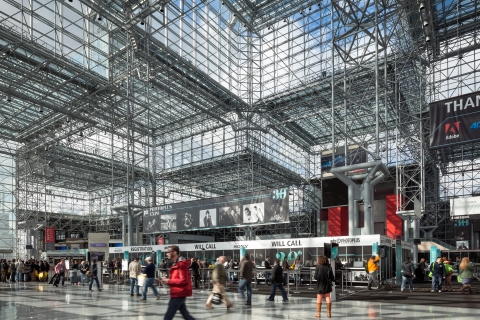 It was a long time coming, but the Jacob K. Javits Convention Center of New York recently celebrated the completion of its 110,000 square foot expansion, as well as renovations to the center located in the heart of New York City.

Renovations included the installation of a new 240,000 sq. ft. glass curtain wall and the construction of the largest green roof in the Northeast.

Billed as “the busiest convention center in the United States”, the Javits Center generated $1.4 billion of economic activity in FY 2012 for New York City and New York State.

“The Javits Center fuels the economic engines of New York City and New York State unlike any other facility, and with our renovation complete, we have more horsepower than ever before,” said Alan Steel, CEO of the New York Convention Center Operating Corporation, which owns and operates the facility.

He added, “The landmark renovation of the Javits Center exemplifies the importance of the building to New Yorkers and its business community, and we are happy to be an integral part of the upcoming development of the West Side neighborhood. I would like to thank Governor Cuomo and his staff, Empire State Development, the design and construction teams and our entire workforce for their commitment to ensuring our continued success.”

Also in FY 2012, the center hosted more than 140 events, including 16 shows on the 2012 TSNN Top 250 trade show list that ranks the largest shows by square footage in the United States.

“The Javits Center is a one-of-a-kind destination that brings the world's leading conventions and trade shows to New York, as well as millions of attendees who support hotels, restaurants and other businesses across the city and the state,” said Joseph E. Spinnato, Esq., CAE, president of the Hotel Association of New York City.

He added, “The unique renovation project has produced a more attractive, more customer-friendly facility, and we are thrilled with the results. We look forward to years of quality business at the new and much improved Javits Center.”

The $465 million renovation that began in 2009 included improvements such as the green roof and the installation energy-efficient glass, among other enhancements, that allowed the building to obtain Silver LEED certification from the U.S. Green Building Council.

Even with the added space, the center currently has some issues stemming from New York State Gov. Andrew M. Cuomo requesting to have the Progressive New York Boat Show dates moved later in January in an effort to boost attendance.

The move has disrupted several other existing shows in the January timeframe, though, and the matter still is not completely resolved.