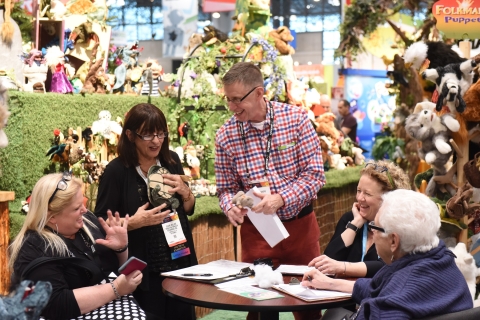 From classic toys like Lincoln Logs and Legos to innovative tech toys like drones, the world of toys came together for the 113th time Feb. 13-16 at the Jacob K. Javits Convention Center of New York.

The show also included 1,237 exhibitors covering 415,000 net square feet. And, amongst the fanfare, excitement and business deals, the Toy Industry Association that supports it all quietly turned 100.

"With hundreds of thousands of toys exhibited, booth traffic was consistently high for all four days of the show," Marian Bossard, senior vice president of global market events at TIA said.

She added, "And TIA's Knowledge Network offered invaluable insight beyond the purchase orders and business card exchanges on the floor."

After more than a century, Toy Fair is well-oiled machine for buyers and sellers. The largest toy marketplace in the Western hemisphere started 13 years before the formation of TIA. Today, the show buzzes with the business of exploring and testing toys that kids will love to play with and learn from.

Exhibitors - new and experienced - use Toy Fair as a place to sell to new buyers and distributors, set up infrastructure and take reorders as well as learn from other exhibitors.

“Members of the toy industry are open to help each other because our products are different,” explained Sergio Amador, a third-time exhibitor and sales manager at Soapsox, a company that makes bath aids for kids.

Soapsox noted that last year they participated in 13 tradeshows, while this year they cut that list to just six, keeping Toy Fair front and center in their strategy.

Many also launch new products or bring back old favorites that children or parents of the 80’s children might remember, such as Cabbage Kids and the life size building toy, TubeLox.

“We brought back Tubelox just this year and the buyers have definitely been interested because there is nothing like it out there,” said Steve McMurtrey, CEO/Co-Founder of TubeLox.

Tech toys included all types of robots and drones for kids as young as seven, and yes, even Barbie has a drone.

One trend, Family Matters, veers away from technology toys and brings back the interactive group activities such as kites, building toys and games.

SCS Direct launched a new non-competitive game, Tall Tales, that gives players of all ages games pieces in which they use to create an infinite amount of imaginative stories. The game is a fun way for kids to develop their imaginations and expand their vocabularies while playing with their families.

New this year also was a consumer component to the show – Play Fair.

The inaugural event, hosted by TIA and LeftField Media, ran Feb. 13-14 at the Javits and offered families and toy collectors the opportunity to enjoy a weekend in New York and experience an interactive, fun-packed event with presenting sponsors LEGO Systems, Inc. and Nickelodeon, as well as other toy and family brands, including Mattel, Hasbro, Warner Bros. Pictures, Crayola and Toys"R"Us.

“In its debut year, Play Fair was a success beyond all expectations that now provides the basis for a much larger show with more expansive play experiences in the future,” said TIA president and CEO Steve Pasierb.

He added, “Families braved cold temperatures to see, play, learn and enjoy time together. It’s clear that we’ve tapped into the passion that families and the general public have for great toys and play.”

2016 World of Asphalt Show, AGG1 Academy & Expo Score Record 18 Percent Attendance Uptick
The 2016 World of Asphalt Show & Conference and AGG1 Academy & Expo broke a trio of records – attendance, number of exhibitors and attendees taking part in the…
U.K.-based Tarsus Group Scores Like-for-like 8 Percent Revenue Uptick in 2016
In a year when two of its largest biennial shows – Labelexpo Europe and Dubai Airshow - did not run, U.K.-based Tarsus Group scored like-for-like revenue growth of 8 percent…
International Association of Exhibitions and Events’ Expo! Expo! Scores 23 Percent Attendance Increase
More than 2,000 trade show organizers and suppliers were in Los Angeles this week to take part in three days of networking, education sessions and a bustling showfloor at the…
OFFPRICE Scores Record-breaking Showfloor, 5.5-percent Buyer Attendance Increase
The first day of OFFPRICE, held Feb. 15-18 at the Sand Expo & Convention Center in Las Vegas, kicked off with crowds of buyers in the aisles, with some exhibitors calling…
Kitchen & Bath Industry Show Scores 25-percent Exhibitor Uptick for January Show
Last year was a successful one for the Kitchen & Bath Industry Show in its first time as part of Design & Construction Week, held in January in Las Vegas and anchored…
NY NOW Will See 73 Percent International Exhibitor Uptick at August Show
NY NOW, the Market for Home, Lifestyle + Gift, will see a significant uptick of international presence on its showfloor when it opens in a few weeks at the Jacob K. Javits…