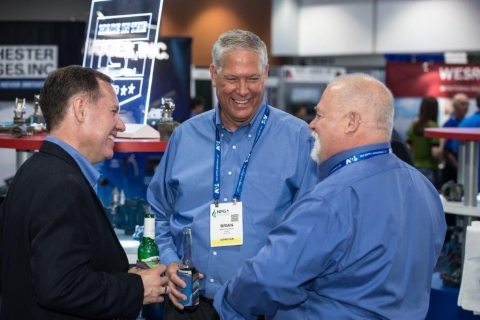 Approximately 4,000 propane industry professionals participated in the annual three-day event that attracted more than 250 exhibitors to a nearly sold-out 73,300 sq. ft. expo floor, an increase in size of more than 3 percent compared to 2016, when a record-breaking 4,100 attendees and 140 exhibitors spanned a 71,000 sq. ft. expo – a showfloor increase of 11 percent compared to the previous year.

She continued, “As exhibitors and attendees gather from across the U.S., the Expo highlights the local aspect of the propane industry. Of the more than 3,000 propane companies in the U.S., more than 70 percent are independent businesses, employing more than 80,000 people. Expo brings these businesses together and the result is a stronger industry that can serve our customers better.”

The NPGA Expo attracted participants from 48 U.S. states as well as the District of Columbia, Guam, Puerto Rico and 39 foreign countries and territories, according to show officials.

Program highlights included a keynote by Staff Sgt. Keni Thomas, former U.S. Army Ranger involved in the battle in Somalia – recounted in the highly successful book and movie Blackhawk Down – who also happens to be award-winning country music artist based in Nashville.

The 2018 NPGA Southeastern Convention & International Propane Expo is set to take place April 6-8 at the Georgia World Congress Center in Atlanta and plans to return to Nashville in 2020.

Eco Expo Asia Attracts Record Number of Visitors
The 13th edition of the show, held Oct. 25-28 in Hong Kong, welcomed a record 14,824 visitors from 106 countries and regions. With 54 percent of visitors coming from…
Record Number of Exhibitors Headed to bauma CHINA
The “who’s who” of the industry will be there when bauma CHINA opens its doors again from Nov. 27-30 in Shanghai. More than 3,300 companies will present themselves at Asia’…
IAAPA Attractions Expo 2018 Breaks Showfloor and Attendance Records
The International Association of Amusement Parks and Attractions (IAAPA) concluded its IAAPA Attractions Expo 2018 on a high note by shattering its own attendance records and…
NACS Show 2018 Breaks Attendance Records, Grows Showfloor
The NACS Show has broken its attendance and expo records once again. Held Oct. 7-10 at the Las Vegas Convention Center, the annual four-day event for the U.S. convenience…
Automechanika Shanghai 2014 Draws Record Number of Exhibitors
Automechanika Shanghai 2014, Asia’s largest trade show for automotive parts, accessories, equipment and services, will have a record number of exhibitors this week at the…
HKTDC Opens Optical Fair with Record Exhibitor Numbers
The Hong Kong Trade Development Council (HKTDC) opened its Hong Kong Optical Fair on 7th November at Hong Kong Convention and Exhibition Centre (HKCEC) featuring a record of…