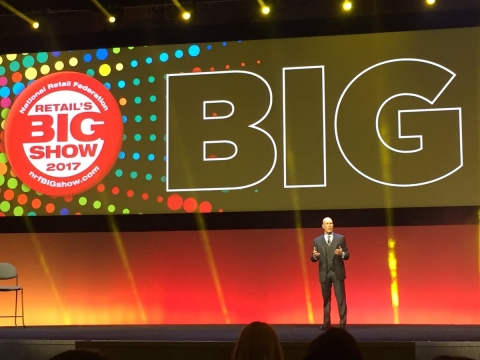 It was retail as far as the eye could see inside Jan. 15-17 the Jacob K. Javits Convention Center in New York.

The show caters its content to large brands, as well as small businesses and covers all areas of retail needs from operations to technology to marketing.

Last year, NRF launched an effort to “surprise and delight” its attendees, setting up unexpected perks to enhance their experiences. This year, it brought back popular items, such as the New York Apple cart and surprise Starbucks gift cards and added to them.

“We always use the survey responses to drive the changes we make to the BIG Show,” said Susan Newman, senior vice president, conferences/strategic marketing at NRF.

As a result, it added foil wraps like those seen at the end of a marathon for those waiting in food truck lines and increased the amount of coat checks to ease winter burdens.

It also tried to help people who have indicated that the conference can be overwhelming get their bearings by offering four guided walking tours of the show. More than 300 people took advantage of this new benefit.

NRF expanded its NYC Store Tours by dedicating a specific part of the show app to the program which gives attendees information on 40 New York City stores with innovative models.

The app includes maps to visit the actual locations so that attendees can experience the retailers’ innovations for themselves at their leisure. For this effort, NRF partnered with Kurt Salmon Digital and McMillan Doolittle.

The BIG show, as it always does, responded to the industry’s continued evolution, particularly in the area of technology. It established a new Innovation Lab filled with robotics, artificial intelligence, wearables, 3D printing and smart technology.

“We are showcasing the new realm of retail innovation,” Newman said. “All of the exhibitors in this area were vetted and had to have working, interactive models of their technology.”

Alongside the Innovation Lab was a Podcast Studio that housed five social influencers - fashion, retail and financial podcasters - who broadcast live from the show on all three days.

Other highlights of the Big Show included:

Currently the show is landlocked and sold out of exhibit space. Given significant challenges that lie ahead due to the upcoming Javits Center renovations and updates, NRF will need to continue to innovate to provide an excellent experience for a growing show within space constraints.

An Attendee Experience Designed to ‘Surprise and Delight’ at NRF Big Show
By Elizabeth Johnson The cold January temperatures couldn’t be felt inside New York’s Jacob K. Javits Convention Center last week as the National Retail Federation’s (NRF)…
Retail’s BIG Show Shatters Records with 35,000 Attendees in New York City
An uptick in holiday sales to $616.1 billion, a 4 percent year-over-year increase, was just one piece of good news for the retail industry during the record-breaking…
National Retail Federation Grows Retail’s BIG Show the “Right Way”
The National Retail Federation’s annual show for the industry – Retail’s BIG Show – definitely takes after its moniker; The show IS big, in fact this year’s, which was held…
CEIR Releases Updated Attendee Promotion Campaign Spending Report
The Center for Exhibition Industry Research (CEIR) has released an updated version of its Cost to Attract Attendees Report. As an invaluable resource for industry executives…
Retail’s BIG Show: Still Going Strong After 105 Years
Attendees at the National Retail Dry Goods Association (NRDGA) Annual Meeting in January 1911 probably didn’t realize they were witnessing history in the making. But what…
Light Reading’s Big Telecom Event a Success with Attendees and Sponsors
In April, TSNN reported on the Big Telecom Event being produced by Light Reading. CEO and founder of Light Reading, Stephen Saunders had referred to the Big Telecom Event as…