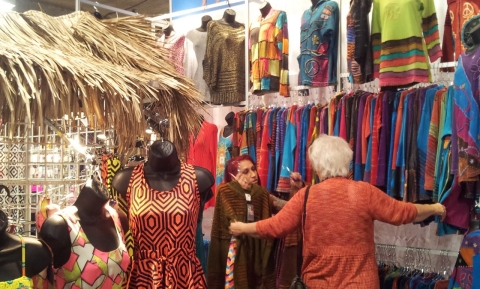 The show has seen boon times during the recession, with both of its biannual editions being honored as TSNN fastest-growing shows.

The February OFFPRICE Show set records, with square footage and highest attendance in four years. There were more than 525 exhibitors on 130,000-plus net square feet and attendance was at 11,006.

The numbers for the August event were on par with February, with a slight increase in attendance, according to show officials.

“Retail in general is starting to come around, but there’s still ways to go,” said Stephen Krogulski, CEO of OFFPRICE. “Our show allows retailers to try new categories and products, and it’s encouraging to see them starting to take those chances again. It is a real boost for us, because they need promotional merchandise, and OFFPRICE is a great place for them to find it.”

Krogulski noted that that being part of the Fashion Week has been a great asset to the show. “We all play a different role in how we provide value to the retailer,” he said, noting that the first two days of OFFPRICE are the busiest, as large retailers shop before MAGIC.

For its recent August run, the show was sporting a new floorplan, as well as new branding and signage since it moved into the downstairs space at the remodeled Sands. Krogulski anticipated an adjustment period for exhibitors and attendees, but said he hopes that the transition will be smooth.

The new space offers additional room to grow, and Krogulski anticipates expansion, especially in the areas of accessories, shoes and cash and carry.

Attendee Jan Voss, with Encore consignment boutique in St. Paul, Minn.,  was on her way to the cash and carry section when a wall of leggings captured her attention.

“There’s every print in the book here. They’ll go well,” she said. Voss has been coming to OFFPRICE for more than 15 years and has always found good deals, a major selling point to her customers as well. She said she likes that the show evolves with her needs and offers a right mix of products. “It gets better every year,” Voss added.

For exhibitor Christiana Gaston, with Texas-based Consolidated Clothiers, the first two days brought record numbers of new business. “It’s the best show we’ve had in the last four years,” she said. “Having the right merchandise helped, but you’ve got to have traffic for it to be good show, and we had a good combination of both this time.”

OFFPRICE Show Holds Its Own in Las Vegas
Dedicated to bargain apparel, accessories and footwear, OFFPRICE Show may have gained its momentum during the economic downtown, but it continues to have a strong presence…
OFFPRICE Show Scores Record Showfloor Size, Most Attendees in Four Years
Neon is a must-have color for spring, according to the buzz on the showfloor of OFFPRICE Show, the bargain apparel, accessories and footwear show that took place Feb. 17-20…
Attendance Holds Steady for the American Association of Orthodontists Annual Session
The American Association of Orthodontists (AAO) held its 113th Annual Session May 3-7 at the Pennsylvania Convention Center in Philadelphia, with an attendance of more than…
Greenbuild Holds Its First Show Outside of U.S. in Toronto
The United States Green Building Council’s Greenbuild International Conference & Expo will be held for the first time outside of the U.S. in Toronto. The show,…
Labelexpo Asia Holds Largest Show Ever in Shanghai
U.K.-based Tarsus Group’s biennial Labelexpo Asia broke all previous records and had its largest show ever when it ran Nov. 29–Dec. 2 at the Shanghai New…
OFFPRICE Show Continues Growth Streak in Attendees, Size
Even though some fashion trade shows appear to be experiencing slight revivals in participation this year, the event devoted to bargain apparel remains ahead of that pack.…