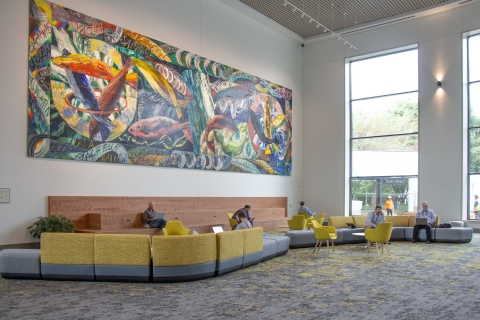 It’s a big month for Portland, Oregon: Last week, its Oregon Convention Center officially completed a momentous $40 million renovation. It marked the first large-scale renovation to take place at the facility since it was built three decades ago, and also took place during OCC’s busiest year to date — a feat in itself.

The renovation included updates to public spaces throughout the venue to improve accessibility, creating a new plaza to serve as a flexible outdoor space option for events, and elevated design touches that reflect the building’s surroundings.

“We made sure to keep our local community and setting top-of-mind throughout the planning and implementation process of this project,” said Craig Stroud, OCC’s executive director. “Subsequently, we concentrated on aspects that are important and unique to Oregon.”

He continued, “I think the results of this focus are evident, both in the impact and originality of the Pacific Northwest-inspired design elements, but also in the level of care that was taken to improve the accessibility, sustainability and flexibility aspects and capabilities we offer our guests, building-wide.”

Combined with the upcoming December opening of the 600-room Hyatt Regency Portland at the Oregon Convention Center, located adjacent to OCC, this convention center renovation will provide a shiny new meetings offering to planners who may not have considered Portland before. Both facilities will also be a boon to the surrounding Lloyd neighborhood.

“When we began planning this comprehensive renovation project, all the way back in 2013, we saw a need for Portland to level up its meetings and convention offerings,” said Scott Cruickshank, general manager of visitor venues for Metro (which owns and operates OCC) and former OCC executive director. “This renovation has done that and more. Portland now has a top-tier conventions venue, paired with a sizeable convention hotel, that has national and international appeal.”

He continued, “Many community organizations, firms and stakeholders have been involved in this project over the years, and so its completion is also exciting to the local residents and partners.”

Another notable aspect of the OCC’s renovation: The project was completed on time and on budget, according to officials.

Oregon Convention Center is the largest and greenest convention center in the Pacific Northwest, totaling 1 million square feet of event space. It hosts an average of 500 events and 600,000 guests annually across two grand ballrooms and 52 meeting rooms. To learn more, go here.

Detroit’s Cobo Center Completes $2 Million Wireless Upgrade
Detroit’s Cobo Center recently completed a $2 million technology upgrade, which included an upgraded Nortel core switch that distributes the WiFi signal and along with…
$551 Million Moscone Center Expansion Nears Completion
Some of the construction in downtown San Francisco will be ending soon, with a positive impact for event planners and attendees. The $551 million Moscone Center expansion…
Charlotte Convention Center Grows Its Footprint with Completion of $126.9 Million Expansion Project
North Carolina’s Charlotte Convention Center is now ready and able to host larger meetings and conventions, thanks to a $126.9 million expansion project that has added…
Bevy of Convention Centers Across U.S. Expand and Renovate
As the exhibitions industry continues to surge full speed ahead, more and more destinations are recognizing the need to upgrade, revamp and expand their convention centers in…
Spokane Convention Center Unveils $55 Million Expansion
The Spokane (Wash.) Convention Center finished its $55-million expansion in late February, adding 91,000 square feet of meeting and exhibit space. Now, the facility…
Detroit’s Cobo Center Completes $279 Million Transformation; Will Unveil Cobo Square in Spring
With the North American International Auto Show officially wrapping up at Detroit’s Cobo Center recently, this marks the end of a $279 million, five-year transformation at…