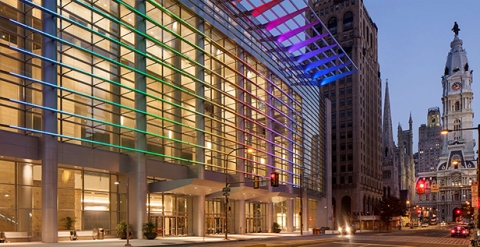 Facility leadership and showfloor trade partners of Pennsylvania Convention Center in Philadelphia have signed a five-year extension and amendment of its 10-year labor agreement. The contract builds on the competitive work rules and expanded exhibitor rights initially put in place in 2014.

Known as the Customer Satisfaction Agreement, the extended labor agreement, which went into effect Aug. 1, allows exhibitors to setup and teardown their own booths without limitations on booth size. This marks a significant shift from the facility’s previous practice, which limited exhibitors to erecting and dismantling booths 600 square feet or smaller in size.

The expanded agreement also continues the PCC’s practice of only assessing overtime charges for trade labor after eight hours of work on weekdays, regardless of start time. This separates the facility from other large convention centers in the Mid-Atlantic and Northeast that assess overtime charges or variable labor rates for work performed outside of the 8 a.m. – 4:30 p.m. window on weekdays, according to PCC officials.

“As a result of the Pennsylvania Convention Center’s strong partnership with trade labor, our facility will have the most progressive exhibitor rights of any major urban convention center in the Northeast,” said Gregory J. Fox, Esq., chair of the Center’s Board of Directors. “We are partners with a common goal of delivering meeting planners, exhibitors and attendees the best possible experience and value. We know that strong customer service and cost-savings improve our competitiveness and put us in a position to make every customer a repeat customer.”

The CSA extension was signed by the four showfloor labor unions that have worked with the facility over the past five years, including Laborers’ International Local 332, IATSE Local 8 (stagehands), International Brotherhood of Electrical Workers (IBEW) Local 98 and Iron Workers Local 405.

“We understand that a successful convention center fuels increased demand for the services of our members while also creating new job opportunities for Philadelphians who work in the region’s hospitality industry,” said Samuel Staten, Jr., business manager for Laborers Local 332. “This extension of our labor agreement shows that the trade unions are committed to ensuring the Center remains competitive.”

According to PCC officials, the facility’s 2014 labor agreement was praised by the conventions and meetings industry for its significant expansion of exhibitor rights, empowering exhibitors to perform more work within their booths without the assistance of trade labor, and enabling them to reduce their labor costs. Set to expire in 2029, the extended CSA builds on that progressive policy.

He added, “The number of new and returning customers is evidence that word of our success continues to spread throughout the convention and hospitality industry.”

Hospitality and tourism is one of Philadelphia’s largest and fastest-growing employment sectors with over 74,300 hospitality-related jobs in Philadelphia County alone, according to Julie Coker Graham, president and CEO of the Philadelphia CVB.

“With a progressive Customer Satisfaction Agreement in place, it keeps our destination competitive and will most certainly lead to business that will sustain hospitality workers far into the future,” Graham said.

ITE’s ABEC Signs Agreement to Expand India Shows
ABEC Exhibitions & Conferences Pvt. Ltd (ABEC) and Pune Construction Engineer­ing Research Foundation (PCERF) announced the signing of a Memorandum of Understanding on…
Bevy of Convention Centers Across U.S. Expand and Renovate
As the exhibitions industry continues to surge full speed ahead, more and more destinations are recognizing the need to upgrade, revamp and expand their convention centers in…
America’s Center Convention Complex Will Update and Expand
America’s Center Convention Complex in St. Louis is about to get a major makeover. On April 16, the St. Louis City Council joined the City of St. Louis’ Board of Aldermen in…
Boston to Sell Hynes, Expand Convention and Exhibition Center
The Boston Convention and Exhibition Center is getting ready to grow. On Sept. 19, the  Massachusetts Convention Center Authority board of directors accepted a proposal…
Expanded Anaheim Convention Center Attracts Multi-Year Event Bookings
Thanks to the flexibility and modern allure of the newly expanded Anaheim Convention Center, trade shows including the National Association of Music Merchants (NAMM) and…
Los Angeles Convention Center Kicks Off the New Year Right with Fit Expo 2016
This year kicked off right with the LA Fit Expo, where nearly 60,000 expected attendees were on hand to share their love of fitness and health.   The conference and…