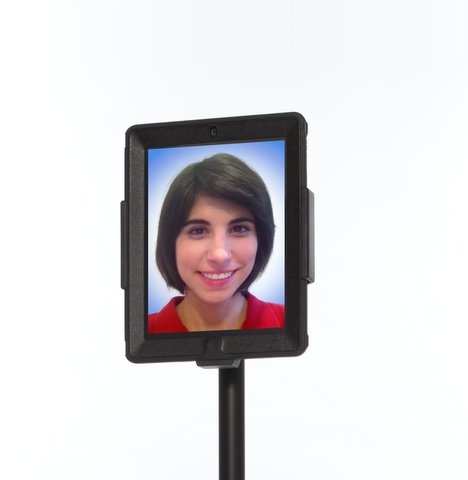 When Bob Vaez, president and CEO of EventMobi, heard about Double Robotics remotely controlled, mobile teleconferencing system robot a couple years ago,he knew there would be a place for it in the trade show and expo world one day.

That day came for Vaez and the EventMobi team last week when they exhibited at IMEX America in Las Vegas.

EventMobi invited customers and media, who were not attending IMEX America, to visit their booth remotely via the robot.

The Double Robotics telepresence robot looks a bit like a mini Segway. The iPad stand is attached to a dual-wheel base allowing the person that is remotely driving the robot to maneuver it backwards and forward and even turn on a dime.

“The robot started as a marketing tactic, but it actually ended up being something useful,” Vaez said. “It grabs attention.”

A planner from the Emergency Nurses Association, who was attending IMEX America in person, invited her technical director to join her virtually for her appointment in the EventMobi booth. He was able to follow her through the booth and join in the conversation as if he were there in person.

Vaez said what makes the robot more appealing than your standard videoconference tool is that the virtual attendee can actually move around the space. You’re not stuck in one location.

But Vaez also said there were issues that still need to be worked out in order for the robot to see its full potential as an exhibitor or show organizer tool. Good WiFi is essential. When you lose the WiFi connection, the robot shuts down.

Vaez also pointed out that the robot needs a smooth surface to navigate; it doesn’t do stairs. There were also some issues with the audio. Booth staffers had a hard time hearing the iPad audio over the din of the trade show floor.

“Security-wise someone needs to be with the robot, someone could knock him over or steal him,” Vaez said.

As technology like this becomes more and more attainable, show organizers would be smart to start addressing questions the technology raises.

First on the agenda would be deciding what exactly is the role of the robot.

Is it an exhibit staffer? If a show organizer considers the robot to be the equivalent of an exhibit staffer, then it could potentially wander the aisles of the trade show. How will other exhibitors react to the attention it receives due to its wow factor? At least until robots becomes as ubiquitous as smartphones.

How Augmented Reality Will Change the Trade Show Game
If you haven't been reading or seeing this new thing called 'augmented reality', let me first introduce it.  The idea is to have graphics and other auditory…
Using Digital to Rock Your Attendee's Trade Show Experience
Digital continues to expand its presence today in every facet of our personal and business lives. The same is true for business-to-business exhibitions. For organizers and…
Augmented Reality - Time to Get on Board
I am so excited about my lecture on augmented reality (AR) at EventTech in Las Vegas. While preparing, I found some data on AR, which provided some great info, but I wanted…
OFFPRICE Show Continues Growth Streak in Attendees, Size
Even though some fashion trade shows appear to be experiencing slight revivals in participation this year, the event devoted to bargain apparel remains ahead of that pack.…
SIA Snow Show Focuses on Quality vs. Quantity of Attendees
SnowSports Industries America puts on the largest show in its market sector every year, SIA Snow Show, but instead of focusing on getting as many people to the show as…
Louisville’s Culinary Scene Showcased in Virtual Reality
The Louisville Convention & Visitors Bureau has launched its first 360-degree virtual reality video featuring one-of-a-kind augmented reality graphics and a unique take…