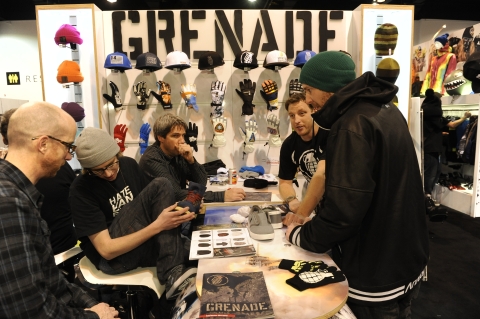 The new event is member-owned by the textile and material suppliersand will be collocated with the 2013 SIA Snow Showon tap Jan. 30-Feb. 1 at the Colorado Convention Center’s Mile High Ballroom.

Sourcing Snow will showcase companies that manufacture materials and components essential to hundreds of snow sports brands, according to show organizers.

“The dedication and commitment of SIA to its members is quite impressive,” said Tom Weinbender, president of Schoeller Textil USA.

He added, ”Snowsports Industries America (SIA) has listened closely to the request for sourcing availability at the SIA Snow Show in Denver and has responded with a scenario that is not only smart, but takes into consideration the challenges and needs of its members to have the opportunity to work with their supply chain. The wisdom of the organization to have the sourcing area open a day early and only run for 3 days shows an inherent understanding of the needs of the entire snow sports industry."

Chris Parkes, national sales manager of Concept III Textiles, added, “As a textile manufacturer, we’ve been hoping an event such as Sourcing Snow could be developed around the SIA Snow Show - it just makes so much sense with all the ski and snowboard outerwear companies we work with each year.”

Sourcing Snow will include exhibits from performance textiles, insulation, zippers/closure systems, straps/webbing and other components.

“As a brand that’s obsessed with making technically enhanced products, we depend on working with the best suppliers in the biz,” said Michael Akira West, SIA Board Member and Owner and Creative Director of 686 Technical Apparel.

He added, “I’m stoked to hear that SIA is stepping up to the plate and producing a winter-based supplier show.”

Julie Garry, SIA board member and CEO of AFRC-Outdoor Gear, said, “Sourcing Snow will add an element to the Snow Show that really has been missing. Manufacturers, designers and purchasing departments will now be able to make the most of their time in Denver and connect with their suppliers.”

SourceDirect Will Debut Alongside ASD Las Vegas in August
ASD Las Vegas is about to get a little bit bigger, with the debut of a new event – SourceDirect – Aug. 4-7 at the Las Vegas Convention Center in Las Vegas.…
SIA Snow Show Gives Emerging Brands a Chance with CRAFT @ SIA
A few years ago, show organizers of SIA Snow Show, owned by the SnowSports Industries America, started tracking independent boutique brands that had either never heard of…
SIA Snow Show Focuses on Quality vs. Quantity of Attendees
SnowSports Industries America puts on the largest show in its market sector every year, SIA Snow Show, but instead of focusing on getting as many people to the show as…
2013 SIA Snow Show Already Sold Out at Denver’s Colorado Convention Center
Even after a mild winter this year, exhibitors for next year’s SIA Snow Show are betting on good times, buying out all of the space on the showfloor nine months in…
FISITA 2012 Exhibition Will Debut Alongside FISITA World Automotive Congress in Beijing
The Society of Automotive Engineers of China (SAE-China) and NürnbergMesse China will debut the FISITA 2012 International Exhibition for Automotive Engineering and…
RV Trade Show Has Successful Debut in China
The ATC Show 2012, made up of All in CARAVANING 2012 and All in TUNING 2012 in Beijing, had an impressive debut for the growing RVand camping industry in China. Jointly…