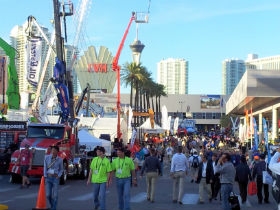 Submissions to be included on the 2015 lists are now open, and the shows must have occurred in 2015. Shows that are over 40,000 net sq. ft. have an opportunity to make the list. The form to fill out is HERE, and the deadline is Feb. 15.

The Association of Equipment Manufacturers’ triennial CONEXPO-CON/AGG snagged the No. 1 spot on the 2014 TSNN Top 250 Trade Show List, with a 2,356,711 net square foot showfloor at the Las Vegas Convention Center.

“We are honored to receive this recognition. CONEXPO-CON/AGG could not have achieved the number-one spot without the support of our membership and the industry, and their affirmation of our value and return on participation for all stakeholders,” stated Megan Tanel, vice president exhibitions and events for Association of Equipment Manufacturers (AEM).

Emerald Expositions was the show management company with the most shows on the list, by far, with 29. Coming in second was UBM, with 13 shows, followed by SmithBucklin, with 11 shows.