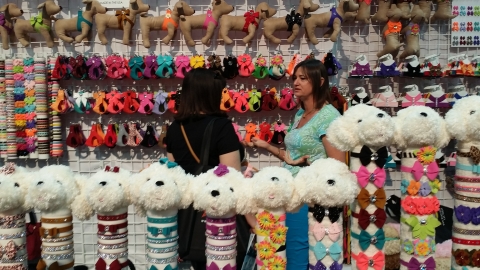 Determined to have a vibrant event, World Pet Association decided to cap the square footage for its 2014 SuperZoo, a trade show for independent pet store owners, that took place July 22-24 at Mandalay Bay Convention Center.

“We have a waiting list of about 250 companies that want to get on the showfloor,” said Doug Poindexter, president of World Pet Association that produces the SuperZoo. “Last year, our attendance grew 10 percent and our floor grew 20 percent. So we decided to pull back this year and let attendance catch up.

The 2014 event spanned about 190,000 square feet and featured 945 exhibitors. Pre-registration for attendance was running 20 percent above last year. but actual numbers were not yet available. It was expected to be at about 16,000.

To boost attendance numbers, the show dispatched a team to grooming events and also to actual pet stores to connect with retailers and explain to them the value of attending. “Many of them say no-one ever comes to talk to us,” Poindexter said, “and we know that us reaching out to them is part of the growth.”

Another contributing factor is that, as Poindexter noted, pet supplies is a recession-proof industry that already has switched back into the healthy growth mode. Independent retailers are opening second and third stores as customers continue to spend on whatever makes their pets happy.

“Our worst year was 2009, and we were flat. But look at where the rest of the trade shows were,” Poindexter said. “Our industry is very entrepreneurial and recession resistant. People continue to treat their pets as their kids.”

He was confident that this year’s attendance would meet the growth expectations and allow for a larger floor next year. “We’ve already drawn the floorplan for 2015 and the exhibit floor will take over where educational sessions are taking place right now. They will move upstairs, and we’ll add about 200 booths.” Square footage is expected to reach about 210,000 sq. ft.

These estimates were not hard to believe on a crowded floor. At the grooming event that is part of the trade show, dozens of dogs getting blowouts in front of the adoring audience. A tiny Pomeranian watched on from a rhinestone encrusted stroller as its owner perused all-natural food offerings, such as “Lamb Souffle with Green Peas” and “Steak with Sweet Potatoes Puree.”

First-time attendee Ann Jackson was at SuperZoo to stock her new store - Lilly’s Bow Wow Bling. “We’re opening and actual brick and mortar store, and we’re looking for boutique items as well as specialty items for agility dogs,” she said. “We’ve only made it down two aisles in three hours.”

At the booth of a Canadian company Romy + Jacob , products for dogs intermingled with products for kids with a dash of stuff for adults too.

“We’re seeing a strong interest in our line,” said sales rep Annette Serrato. “A lot of boutiques are opening up and they like to carry notepad, makeup bags and totes that make great gifts to pet owners. Being Canadian, our clear raincoats for humans and dogs also do very well.”

NACS Show 2018 Breaks Attendance Records, Grows Showfloor
The NACS Show has broken its attendance and expo records once again. Held Oct. 7-10 at the Las Vegas Convention Center, the annual four-day event for the U.S. convenience…
NPGA Expo Attracts Record Number of Exhibitors, Grows Showfloor
The National Propane Gas Association experienced record growth in both size and exhibiting companies at its 70th Southeastern Convention & International Propane Expo,…
EXPO MANUFACTURA Celebrates Steady Uptick in Attendance, Showfloor
Reflecting the dynamic growth of the manufacturing industry in Latin America, EXPO MANUFACTURA, the annual trade show and conference for the manufacturing and processing…
OFFPRICE Showfloor Grows Once Again at Summer Show in Las Vegas
The off-price industry is enjoying a heyday in which more national retailers are turning to the channel looking for a boost, and the OFFPRICE Show in Las Vegas remains a…
PACK EXPO and ICUEE Draw Robust Attendance, Showfloors
Shows in the packaging and construction/utility equipment industries drew strong attendance and growing showfloors recently in Las Vegas and Louisville, respectively. PACK…
2017 NACS Show Boasts Record-Breaking Attendance and Showfloor
The NACS Show celebrated a record-breaking jump in attendance and size at its most recent event, held Oct. 17-20 at McCormick Place in Chicago. As the largest annual trade…