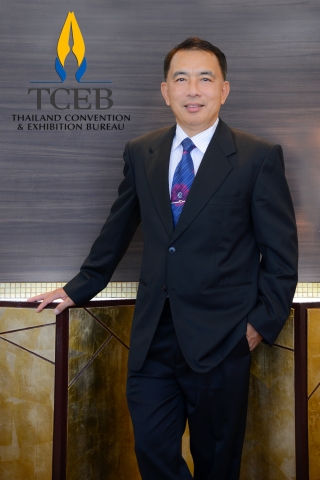 The Thailand Convention & Visitors Bureau as named Nopparat Maythaveekulchai as the new president of the organization.

Nopparatwill be tasked with continuing to implement TCEB’s existing 5-Year Strategy that highlights 5 policies designed to emphasize the commitment between public and private sectors.

“I am glad and honoured to be one of executives considered by TCEB as having right qualifications and eventually met the criteria for the position of TCEB president,” Nopparatsaid.

He added, “Personally, I possess more than 10 years of experience in working and managing organisation with additional interest in the happenings of MICE industry. In my opinion, MICE is the rising star among global trend with no less than 10-15 percent growth each year. The industry has been able to generate over 80,000 million baht annually. Furthermore, my past experience could help in terms of coordinating with international organizations to drive Thai MICE to global stage. Particularly, the representation of Thailand as the destination for MICE in Asian region and the pooling of international-scale mega events into Thailand.”

Nopparat’s focus will include the implementation of International Meetings and Conventions Industry Plan, 2012-2016, that specifically accentuates five policies designed to raise Thai MICE industry to grow side by side with international competitors before stepping into the AEC in 2016.

“In enhancing the growth and driving the industry forward rapidly, there are five policies I believe are important as they are the foundation for the integration of the whole MICE system,” Nopparatsaid.

Here is a summation of the five policies:

First policy focuses on the establishment of coordination between public and private sectors in driving Thai MICE industry forward.

Third policy embraces the pooling of mega projects into Thailand.

Fifth policy is the development of MICE Intelligence Center.

Nopparat has 10 years of experience in organization management. He started his career at TOT Public Company Limited (formerly the Telephone Organization of Thailand) and continued to work his way up the ladder from 1983-2013. His latest position was the executive vice-president of TOT Plc.

Both new executives will play important roles in driving growth for TCEB under the new president’s strategic management and visions, according to TCEB officials.

TCEB Unveils 5-year MICE Roadmap
The September Hong Kong Jewellery & Gem Fair (September Fair), organised by UBM Asia, held its 33rd edition this week. The trade fair runs from 16th to 20th September and…
Reed Exhibitions Greater China Names New President
Nat Wong, current president of Reed Exhibitions Greater China, will be succeeded April 16 by Hu Wei. Wei came on board March 16 to understudy Womng and be orientated to the…
TCEB Announces 2016 “D-MICE” Strategy
The Thailand Convention and Exhibition Bureau (TCEB) announced new strategy to boost its domestic MICE (D-MICE) in response to the Royal Thai Government’s policy on…
TCEB Launches New Brand Campaign
Earlier this month, the Thailand Convention & Exhibition Bureau (TCEB) launched a new branding campaign, “Thailand: Redefine Your Business Events,” aiming to meet the…
Randy Pekowski Named President of The Expo Group
The Expo Group has named Randy Pekowski president of the company, of which he already serves as COO. Founder and former President Ray Pekowski will remain CEO and chairman of…
Ken Lawson Named President and CEO of Visit Florida
One week after Will Secombe stepped down from the top post at Visit Florida in the midst of a controversy surrounding a $1 million promotional contract paid to musician…