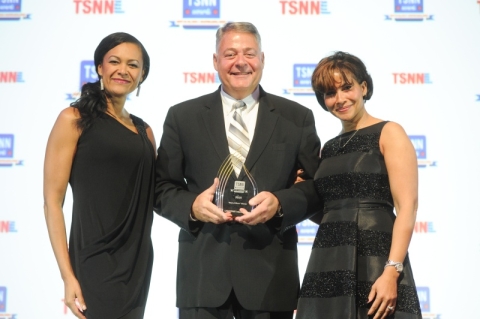 Trade Show News Network is excited to announce the five finalists for our TSNN “Best of Show” awards. We asked the shows to simply tell us why they felt their show was ‘best’, and the ones below exemplified innovation in the trade show industry.

Now, they need all of YOU to vote for which one you think deserves to be named the overall BEST show. The overall winner will be announced at the TSNN Awards Oct. 29 in Atlantic City, N.J,

The TSNN Awards honors the top 50 fastest-growing shows in the U.S. during a three-day weekend celebration.

Below are the amazing shows competing for this year’s “Best of Show” award!

Why Vote for ASD Market Week?

Because they got the “goods” and know their customers! As with any trade show in today's technologically driven age, attendees and exhibitors have more ways to use the internet to find what they need. In order to maintain and grow their market share, this innovative show developed new exhibitor and attendee acquisition tactics. At the same time, they also reinvented their retention strategies to keep the value of their show top of mind with their customers in both groups. How? A first of its kind inbound lead generation program for Exhibitors that brought inquiries to them, versus them always having to go out and find them. They really amped up marketing for attendee programs too. They have always been an “exhibitor first show”, but this time they decided to focus on both audiences because they knew their exhibitors wanted a new and more diverse buyer base to pull from – nice customer focus! No wonder ASD Market Week is one of the oldest and longest running shows in Las Vegas! READ MORE

Why Vote for Consensus?

Because they “coined” the phrase bravery in education while overcoming huge hurdles, creating an event in the cryptocurrency and blockchain space. Because the blockchain industry is so young the main hurdle was educating attendees, exhibitors, and sponsors what a conference and exhibition is. Since this space was not ready for a full blown trade show floor, they worked closely with Freeman to design and offer turnkey, branded exhibit structures so exhibitors/sponsors simply had to show up. A large part of their success was due to the constant engagement with subscribers, attendees, and prospects. They were very streamlined with their technology approach, utilizing Slack for internal team communication, group collaboration, and direct messaging, which actively engaged and informed their audience. For a small team they have experienced strong growth and awareness in this new industry and are cashing in! READ MORE

Why Vote for CES?

Because of their never ending innovative practices; their fresh approach keeps us wired with fascination over the “latest” and “greatest”. We loved the way they maintained the show’s stature as the gathering place for those who thrive on the business of consumer technologies by bringing in three notable new components: Extreme Tech Challenge - developed to provide exposure and capital to accelerate product development. Shark Tank - hosted an open call for entrepreneurs who wished to appear on the Emmy Award winning reality program. Social Media Promotion Strategies - they restructured their social media strategy to follow an 80/20 rule regarding the content pushed out from each channel, keeping fans and target audiences extremely engaged on multiple social  levels; talk about electrifying! READ MORE

Why Vote for SHOT Show?

Because they had their eye on the prize when they creatively satisfied their exhibitor waitlist, delivering fresh content to their buyers and held off outboarders. They created a turnkey kiosk program with valued partners to accommodate 100 first time exhibitors, utilizing smart marketing and naming it SHOT Show NEXT – the Next Generation of Exhibitors, which finished with rave reviews! In the process they ended up with a group of companies that are now dedicated SHOT Show evangelists (an event marketer’s dream…). This show never rests on its laurels and even pumped up digital presence on their popular mobile app in addition to going old school on the show floor with human directors and effective signage. For all these reasons and more the SHOT Show knew how to use the right ammunition to target success! READ MORE

Why Vote for Vegas Cosmetic Surgery?

Because of their impressive ability to adapt, overcome and grow while looking good in the process! Their dedicated small team pulled together and helped bridge the gap between specialties within the aesthetic field. This lead to a cross-pollination of ideas, techniques and methodologies allowing the community to grow exponentially as a whole (nice work)! They pumped up interaction between attendees and exhibitors which increased seamless integration of technologies into the everyday practice environment (a shining example of how a show can leave a lasting effect on event participants)…Their innovation and dedication has resulted in a great success story – the building of a top 250 trade show from scratch; quite a handsome performance! READ MORE

Vote today and tell us which one deserves to be honored with the “Best of Show” award!