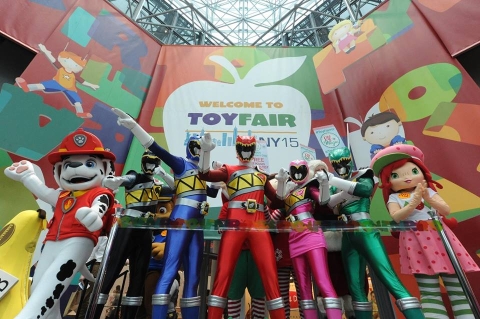 Every year, when thousands of attendees head to the Toy Industry Association’s North American International Toy Fair, the only thing missing on the showfloor filled with toys and game were the kids.

Starting with the February 2016 show, the public will have the opportunity to see all the latest new products with TIA and LeftField Media teaming up to launch Play Fair - "a celebration of play and entertainment for all ages”.

She added, "It's a truly one-of-a-kind event for families and fans to explore nostalgic and innovative toys and brands in an all-ages atmosphere that can't be beat!"

"We're humbled and thrilled to work together with TIA on Play Fair," said Greg Topalian, president of LeftField Media. "For more than a century, TIA has gathered the professional side of the toy world together at Toy Fair, and now families, fans, and collectors will finally get to experience this excitement inside their own event.”

He added, “Play Fair will be a space to create fun, engaging, and rewarding connections between brands, their current fans, and the fans of tomorrow – and get a glimpse at new toys before anyone else on the planet!"

Play Fair will be headquartered inside New York's Javits Center and will turn all of Manhattan into a giant "game board," encouraging attendees to visit various iconic New York institutions and landmarks to make the most of their time in the city and unlock Play Fair discounts, exclusives, and rewards, according to show management.

"Our launch of Play Fair couldn't come at a better time, as we're seeing a growing number of studies and reports that underscore play's crucial developmental benefits to children, and its impact on the happiness and well-being of adults," said Steve Pasierb, TIA president and CEO.

He added, "We look forward to welcoming families from far and wide for a spectacular event filled with magical moments and playful experiences that they will be re-living and talking about long after they leave the show."

The LEGO Group and Nickelodeon have been confirmed as presenting sponsors.

LeftField Media Will Launch Anime NYC
LeftField Media will launch Anime NYC, a new convention focused on anime, manga and Japanese pop culture, next year in New York City. The first Anime NYC will take place Nov…
Leftfield Media, Tubefliter Will Launch Stream Con NYC
LeftField Media and Tubefilter will launch Stream Con NYC, the first-ever digital content convention in New York City. Founded to engage and connect thousands of fans,…
Toy Association Moves Toy Fair New York to Fall Starting in 2023; Sets Dates for Dallas Show This Year
The Toy Association unveiled plans to change its long-running Toy Fair New York from a late winter to early fall time frame starting next year and set dates for a one-time…
BZ Media Will Debut InterDrone Show for Commercial Drones in Las Vegas
Ted Bahr, president and CEO of Melville, N.Y.-based BZ Media, said now is the right time to launch a new show his company’s been strategizing about for a while: InterDrone,…
Automechanika Shanghai Will Debut at a New Venue to Accommodate Growing Show
In response to the rapidly expanding Automechanika Shanghai, a trade fair for automotive parts, accessories, equipment and services, this year’s show, scheduled Dec. 2-5,…
People News: The Expo Group, GES, Leftfield Media Make New Hires
The month of May has been an unusually busy one for new hires across a wide variety of companies in the trade show industry. The Expo Group hired Lloyd van Meter its new…