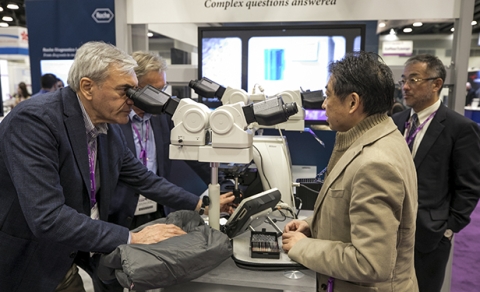 While some medical shows may come and go, there are others that have figured out that staying relevant, keeping ahead of trends and becoming invaluable to the audiences they serve is the secret recipe to sticking around for the long haul – in some cases, for well over a century.

Case in point is the United States and Canadian Academy of Pathology (USCAP) Annual Meeting, which celebrated its 107thedition March 17-23 at the Vancouver Convention Centre in Vancouver, Canada.

Known the largest gathering of M.D. pathologists in the world, the annual conference and expo attracted more than 4,700 attendees and 136 exhibitors spanning a 24,000 square foot showfloor, with 28 percent of its attendees heralding from outside of North America, according to show officials.

But it’s USCAP’s leading-edge pathology education that is the main attraction of the event and a natural extension of the Academy’s panorama of year-round continuing medical education for its 10,000-strong membership of pathologists across the globe.

This year, attendees had a bounty of educational opportunities to choose from, with 206 meetings, courses and sessions as well as a plethora of medical research abstracts divided into 32 platform presentations and six poster sessions on the expo floor – always a huge highlight of the event.

While it’s one thing to stay on top of the latest research and development, all while working overtime to remain valuable and keep loyal attendees returning year after year, it’s another to do that for more than 100 years.

According to David B. Kaminsky, M.D., FIAC, executive vice president of USCAP, keeping abreast of and adapting to the changing ways pathologists want to access their continuing education has also been key to the event’s longstanding success and staying power.

“Educational research, evaluations and conversations with learners have indicated that preferences for how they receive continuing medical education are changing,” Dr. Kaminsky said.

He continued, “There is a desire to substitute the traditional classroom approach with interactive learning and with access to polished digital educational assets that can be viewed and assimilated on demand using mobile devices. Interactive microscopy restores an intimate mentoring relationship to the learning process and has spear-headed USCAP’s development of the Mentoring Academy that provides a structured platform to facilitate mentoring. Hands-on teaching of procedures, such as ultrasound-guided fine needle aspiration biopsies and 3D interventions increase comprehension and retention.” 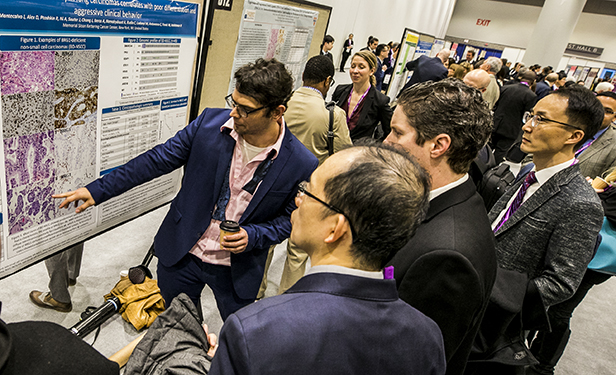 Keeping the event healthy and robust has not only come down to maintaining quality, cutting-edge educational content but also welcoming the future of the profession with open arms, according to Kris Herlitz, who has been managing USCAP’s expo for 25 years and is the managing director of AIM Group International.

“Prior to Dr. Kaminsky, the previous executive director made it his life’s mission to bring the post-grad students fresh into it and make that next generation coming in the lifeblood of the conference,” Herlitz explained.

He continued, “Dr. K took that and compounded it many times over to make sure there was a youthful feel, everything from changing the logo to making sure the branding is fresh every year to keep pace with the modern world and what the youth is looking for, and a lot of that is visual.”

Meanwhile, understanding what exhibitors want and expect while finding new and more targeted ways for sponsors to engage with attendees, all while preserving the integrity of the event, has been a delicate balancing act but one that has helped keep the meeting and its trade show vital and engaging, Herlitz explained.

“We keep a separation of church and state in our programming but we also run an exhibit sponsorship program that toes the line and is aware of every regulation that’s out there,” Herlitz said.

He continued, “But what sponsors want has gone from quantity (of attendees) to targeted engagement – they don’t just want signage or a lanyard, they want to know how they can engage and get in front of key opinion leaders. Now we’re at the crossroads of how we can bring that in because there’s always the fear of messing with our accreditation.”

Herlitz explained that where once just one or two pharmaceutical companies would come to the event to recruit, that number has grown to about four or five major companies in the past couple of years, growth that has raised some logistical considerations.

“This is the second year they’re all wanting to have a presence but they would like more engagement, such as sponsoring a session or having a workshop,” Herlitz said.

He continued, “We don’t want to fly in the face of our own programming by drawing 100 attendees away, so (the question is) how and when can we do it? That’s something we’re looking at, not just with pharma but also with other companies.” “This is one of the key conferences that we exhibit in, as education is a big part of our DNA and USCAP is very academically oriented, so there is a lot of new information coming out of this conference that our pathologists always like to stay on top of,” explained Lei He, director of business development, CRO North America for PhenoPath, a national reference lab that provides independent diagnostics to oncologists and clinicians.

She added, “This event is also like a homecoming – everyone runs into colleagues, clients, former clients and former students, so it’s a great place to network. We’ll definitely be back next year.”

Besides all the education and networking opportunities, having the chance to reunite with friends and colleagues was also a major reason many attendees said they enjoyed attending USCAP every year, including Andrew Belizzi, M.D., director of immunohisto-chemistry, director of GI pathology and clinical associate professor of pathology at the University of Iowa Hospital & Clinics.

“This is my 15thUSCAP, I’ve come every year since I was a second-year resident,” Belizzi said. “This is the most important and largest pathology meeting in the world, so for me, this is an opportunity to see the state of the art in terms of clinical diagnostics as well as advances in research.”

He added, “The other huge perk is I get to see all the colleagues and friends I’ve made from all the places I’ve worked over the last 15 years – I get to connect with them and I really enjoy making connections.”