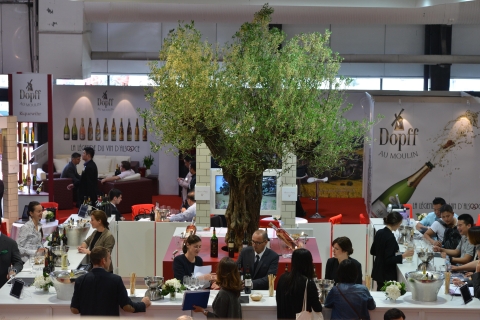 Vinexpo, the international exhibition for wine and spirits professionals, is gearing up enter the world’s largest wine-consuming market with its first U.S. trade show.

Scheduled March 5-6, 2018, at the Jacob K. Javits Convention Center in New York City, Vinexpo New York is expected to host 200 exhibitors from wine-producing regions throughout the globe, along with 3,000 attendees, including importers, distributors, retailers, brokers, e-commerce, on-trade buyers and sommeliers.

“We’re excited to combine forces with Vinexpo to bring the international world of wine and spirits to New York – the trade capital of the U.S.,” said Mary Larkin, executive vice president of Diversified Communications, which will be producing the show in partnership with Vinexpo.

To be held in the Javits’ 45,000 square foot River Pavilion, the new industry event will feature two days of business meetings, tastings, conferences, master classes and networking events, as well as an expo showcasing the newest wines and spirits for the U.S. market.

Not only does Vinexpo New York plan to adapt its programming to suit the U.S. wine industry but will also focus on facilitating the entry of global wine and spirits businesses into the fast-evolving American market.

With wine consumption in the U.S. expected to rise almost 5 percent by 2020, according to a recent report by Vinexpo and research firm IWSR, there couldn’t be a better time to launch a trade show for the American wine market, according to Guillaume Deglise, CEO of Vinexpo, which has held biennial exhibitions in Bordeaux, France since 1981.

“The time is right to bring Vinexpo to the U.S. market, which leads the world in wine consumption and whose influence only continues to grow,” Deglise said.

He continued, “Vinexpo New York will present American buyers with an unmatched opportunity to experience, on their own turf, wines and spirits from international markets, including a number of products that have never before been available in the U.S. market.”

As a catalyst for international wine and spirits business, Vinexpo draws thousands of exhibitors and tens of thousands of buyers, importers, sommeliers, distributors, retailers and other qualified professionals to its biennial exhibitions in France and Asia.

Founded 36 years ago, Vinexpo’s flagship Bordeaux show is considered the world’s leading trade show for wine and spirits professionals as well as a partner for the global wine and spirits industry.

Set for June 18-21, the upcoming Vinexpo Bordeaux is expected to attract 2,300 exhibitors and 48,000 trade visitors from 151 countries to the city’s Parc des Expositions convention center.

In 1998, the event brand expanded into the Asian wine market with the launch of Vinexpo Hong Kong and Vinexpo Tokyo, held on even years so as not to conflict with Vinexpo Bordeaux, held on odd years.

Unlike its predecessors, Vinexpo New York will be an annual event.

Besides opening the door for international wine producers to reach more U.S. buyers and industry professionals, the show’s launch will also give Vinexpo bragging rights as the first wine trade show organizer to have a presence on three key global continents.

UBM Fashion to Launch First Consumer-Facing Fashion Trade Show, VINTAGE@Intermezzo
UBM Fashion is gearing up to debut VINTAGE@Intermezzo, its first-ever consumer-facing fair inside Intermezzo Collections, one of six fashion trade shows within the NY Women’s…
Second Annual Play Fair Returns to the Big Apple, Expands Showfloor
Play Fair, a public celebration of play and entertainment for all ages, returned to the Jacob K. Javits Convention Center in New York City for its second year with a larger…
Streampoint Launches Apple Wallet Integration for Event Registration
Streampoint Solutions, a provider of event management tools for the conference, tradeshow and special events community, recently launched new functionality in the form of…
Teamsters Local 25 Launches First Training Program for Boston’s Trade Show Industry
In an effort to draw more top-tier trade shows to Boston, Teamsters Local 25 has launched the city’s first trade show worker training program. The goal of the program is to…
Asia in the Spotlight at Vinexpo 2015 in France
Asia was one of the major highlights of the 18th edition of Vinexpo 2015 in Bordeaux, and plans are well underway for the upcoming editions of the exhibition:…
UBM Will Launch First Overseas MAGIC Show in Japan
On the heels of buying U.S.-based fashion trade show portfolio, Business Journals Inc. last week, U.K.-based UBM now will launch IFF MAGIC Japan, a new joint venture between…