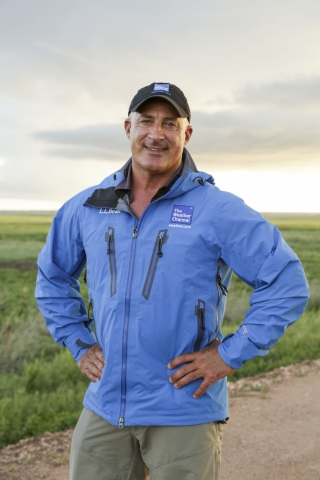 The most recognized face in weather – The Weather Channel’s Jim Cantore – will step away from his reporting on all of the top events for the past 25 years, including Hurricane Katrina and Super Storm Sandy, to emcee the TSNN Awards’ gala celebration Nov. 7 in Atlanta.

He added, “Weather plays an important role in the execution of trade shows and events, and as a storm tracker Jim understands how unpredictable Mother Nature can be to our industry.”

The gala will honor 50 of the fastest-growing trade shows in the United States, with association and for-profit winners being named onstage for fastest-growing overall in attendance and net square footage (www.T-awards.com).

“We are very excited to have someone of Jim’s caliber emceeing the TSNN Awards’ gala celebration,” said TSNN President Rachel Wimberly.

She added, “He is well known for his animated, tenacious style, both in the field and in the studio, and he is the perfect choice to light up the stage on a really special evening for the trade show industry.”

As Weather’s storm tracker, Cantore reports tirelessly before, during and after weather events, providing live reports and insights for the network.

When not in the field, he covers the latest forecast and weather news on “AMHQ,” weekdays from 7-10 a.m. ET.

He also is a frequent contributor to NBC programs such as "Nightly News" and "TODAY," as well as for NBC affiliates nationwide and multiple MSNBC shows.

A native of White River Junction, Vt., Cantore graduated with a bachelor's degree in meteorology from Lyndon State College (Lyndonville, Vt.), where he returns each year to work with students in the meteorology program.

Weather hired Cantore out of college and he first appeared on air in July 1986. He was inducted into the Punxsutawney Weather Discovery Center Hall of Fame in February 2013, and in 2013 he was inducted into the Silver Circle of the National Television Academy of Arts & Sciences Southeast Chapter. In 2014, he was elected a Fellow of the American Meteorological Society.

Cantore is a sought-after speaker and serves as a celebrity ambassador for the American Red Cross, enabling him to further spread the message of preparedness, an issue of vital importance to him that carries over from his work.

He also has appeared in a series of public service announcements for FEMA on the importance of preparing your home and family for severe weather.

When he's not covering the weather, Cantore's passion for the outdoors is equally evident in his leisure activities, which he enjoys with his two children.

He is an avid skier, golfer and gardener and makes his home in the Atlanta area. Cantore is an active supporter of several charities, including FRAXA, the National Fragile X Foundation.

The list of 50 shows that will be feted during the three-day, celebration-filled weekend can be found below and HERE.

The TSNN Awards weekend kicks off with an opening night Tailgate Party at the College Football Hall of Fame. The next morning will be a conference featuring the chairs of IAEE and SISO speaking on the “State of the Industry” followed by a luncheon and keynote at the Atlanta Convention Center at AmericasMart.

That evening, also at the Atlanta Convention Center, will be the TSNN Awards gala celebration, followed by a brunch the next morning at the Jimmy Carter Presidential Library and Museum.

The TSNN Awards is proud to be partnered with awards co-founder The Expo Group, as well as city sponsor the Atlanta Convention & Visitors Bureau.

2022 TSNN Awards Gala Celebration Headed to Caesars Forum Nov. 8-9
Trade Show News Network (TSNN) is thrilled to unveil it will be celebrating the 2022 TSNN Awards Nov. 8-9 at host venue CAESARS FORUM in Las Vegas. The two-day festive…
TSNN Awards Deadlines: “Best of Show” Award, Show Manager of the Year Awards
Have you voted yet for the TSNN Awards “Best of Show” nominees or submitted a nomination for the Show Manager of the Year awards? Both deadlines are this week! Five shows…
Submit Your Show for the TSNN Awards’ “Best of Show” Award
For the “Best of Show” award, we are leaving it up to you to tell us why you think your show is the BEST. This is the fourth year for this special award, and five…
Don’t Underestimate the Power of the Right Emcee
The highly anticipated shift back to in-person events is slowly getting underway as meetings and events planners around the globe rejoice. Virtual remains the overarching…
2018 TSNN Awards Fastest-growing Shows Unveiled
For the ninth year in row, Trade Show News Network will hold its prestigious and original TSNN Awards program that honors the top fastest-growing shows in attendance and net…
Record-breaking Crowd Celebrates Fastest-growing Shows at the 2014 TSNN Awards in Cleveland
The National Society of Genetic Counselors Annual Education Conference was named the overall fastest-growing show in net square footage and UBM's Medical Design &…