On Your Marks: Run Shows Set to Debut in U.S. Next Year 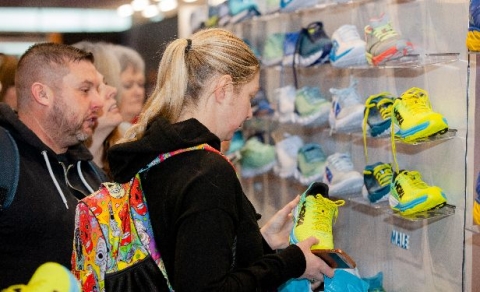 Raccoon Events is built upon the guiding principle that runners slow down to walk trade show aisles and — dare to dream, sit — for inspirational keynotes. Having successfully launched two run shows in the United Kingdom, where the health- and wellness-minded company is based, it is time to step across the pond.

Run Show USA, as the American version is dubbed, is off to a brisk pace planning for 2022. Its initial show will debut Jan. 29-30 at Hynes Convention Center in Boston, and a second event at Donald E. Stephens Convention Center in Chicago was recently announced for June 4-5. A third stop is in the works, added Nathalie Davies, group director for Run Show USA.

The scheduling of the two shows reveals Raccoon’s strategy. Both events are deliberately scheduled months before the cities’ premier marathons. The idea is that participants in the Boston Marathon, for example, are not going to have the time, energy or desire during race weekend to spend engaging with exhibitors about new apparel and other related goods.

“We discovered there was a real hole in the market,” Davies said.

The first Run Show backed up their belief. About 9,000 attendees and 100 spectators converged on Birmingham, England, for the first event in 2019. The numbers more than doubled in January 2020, the last show held before COVID forced a break in the action.

Davies said initial findings show the American events are on track for a similar initial showing. The events are getting off on the right foot in terms of speakers and attached partners.

Many of those same speakers will appear at the Chicago show, which has attracted Fleet Feet as an integral partner.

Run Show USA’s model launches at a time when many trade show and meeting experts say regional shows will be popular. Davies expects most of the Boston show’s attendance to come from New England, with the Chicago event to draw from Midwestern destinations within a two to three hour drive.

While marathons are arguably the most marquee of races, the events “are for all runners,” said Davies, who used the U.K. lockdown to graduate from 5Ks to half-marathons. “We've got such a spectrum of runners and they are all interested in different things.”

The content, goods and tight-knit community are expected to be the driving factors for attendance. The cost is $15 to stroll along the floor and watch the speakers. In the U.K., visitors have spent an average of five to six hours on the showfloor, Davies said.

No races will be attached to the expos, though it’s hard to imagine that no groups will go for a pre- or post-show run. An indoor track around the trade show is impractical because it blocks the emergency exits, Davies added.

Ultimately, Run Show USA expects to have five American events. But it’s not a sprint to get there.

CES Has Debuted Next Generation Consumer Technology for 50 Years
The Consumer Electronics Show (CES) debuted in June 1967 as a response to the growing demand for consumer electronics products. The Americana and New York Hilton hotels…
Raccoon Events Set to Launch National Running Show in Boston in 2022
Raccoon Events will be expanding its award-winning U.K.-based National Running Show series to the United States. The first in a series of Run Show USA events will take…
Post-Event Marketing – A Valuable Tool for Next Year’s Show
You’ve just wrapped up your show and it was a huge success: your attendance numbers were up, your attendees gave you positive feedback, several of your exhibitors have…
How VR Can Enhance Your Next Trade Show
From a business’s perspective, trade shows offer an exceptional opportunity to demonstrate their product and connect their brand to potential consumers in a face-to-face…
How to Crush Your Competition at the Next Trade Show
Trade show marketing is a great way to put your brand in front of your target audience through face-to-face demos and interactions. Unfortunately, trade show marketing can…
5 Must-Have Mobile Apps For Your Next Trade Show
Trade shows are a fantastic way to establish yourself in your industry and collect tons of leads. However, the best ways to manage the leads and contacts you collect, as well…