As its second major in-person convention since the onset of the pandemic, the Asian American Hotel Owners Association’s (AAHOA) annual AAHOA Convention & Trade Show (AAHOACON) once again converged to unite the who’s who of the hotel industry for four days of networking, learning, deal-making and cultural celebration.

Known as the “Super Bowl” of the hospitality industry, AAHOACON is the nation’s largest event exclusively for hotel owners and the biggest gathering of AAHOA’s approximately 20,000 members, who own 60% of hotels in the U.S.

While the show’s 2022 showfloor experienced a slight contraction in exhibiting companies compared to AAHOACON’s 2021 comeback at the Kay Bailey Hutchison Convention Center in Dallas, which drew in 534 exhibiting companies, many of this year’s exhibitors opted for larger booths, according to AAHOA officials.

Out on the showfloor, many exhibitors, including Janice Tata, regional director of development for Cobblestone Hotels, commented how great it felt to be back at AAHOACON’s trade show, a welcoming and focused business environment spanning 300,000 square feet of space.

“Something that sets AAHOACON apart is the number of people [who] come to the convention and their passion for what they’re doing with their hotels,” Tata said. “They’re always on the lookout for new things that are coming up, as well as innovations.”

“I’ve done a couple of shows that actually happened in the Baltimore Convention Center this month, and this is by far the best show that I’ve been to,” he said. “The booths are all extraordinary, and just the overall [number of] people wanting to know about what we have going on has been the best part.” 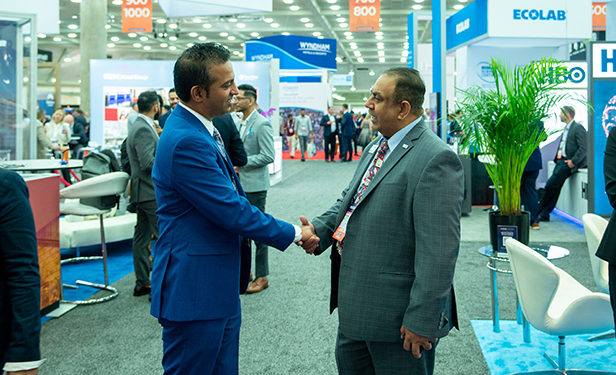 Alongside 10 forward-thinking educational sessions conducted by 42 speakers and industry icons, hoteliers took advantage of plentiful networking receptions, the annual awards celebration and a host of immersive special events celebrating the Indian community and hospitality industry via food, events, culture and dress, including the donning of traditional Indian attire at the event’s ever-popular gala.

The annual event is also known as a multi-generational family affair, reflecting the legacy of generations of pioneering Indian entrepreneurs and business owners who began immigrating to the U.S. in the mid-20th century to purchase and run motels and hotels that then became thriving family businesses.

According to association officials, AAHOA was created in 1989 to help Indian hoteliers overcome the discrimination they faced in the hospitality industry, particularly from banks and insurance companies. More than 30 years later, AAHOA members now own more than one in every two hotels in the nation.

Meera Desai, a college student and future hotelier with the Paarth Corporation, was enthusiastic about her first AAHOACON experience.

“My parents are hoteliers, and they have been [working in] the business for a long time,” Desai said. “I was very inspired by the Women’s Luncheon Session. I was also inspired by the support from other women here in the convention. As a young woman today, it can be intimidating since there are not a lot of women taking up leadership roles. I took away that women need that support, and that meant a lot to me since I will probably take over the business someday.”

On the last day of the event, AAHOA made history by electing its youngest board chairman, Texas hotelier Nishant (Neal) Patel, who became an AAHOA member in 2012 and served as an AAHOA ambassador. After being elected as the Young Professional Director Western Division, a position he held for three years, Patel joined AAHOA’s Board of Directors in 2016.

“I’m thrilled to be stepping up to the role of chairman and honored to serve as the association’s youngest chairman in history,” Patel said. “If you’ve ever wondered to what extent AAHOA serves its membership, I am a perfect example. My parents didn’t have the opportunity to have AAHOA as a resource, but thankfully, when I took over the family business, AAHOA was there for me as I navigated the hospitality industry. AAHOA provided me with the educational tools I needed to run a hotel successfully.” 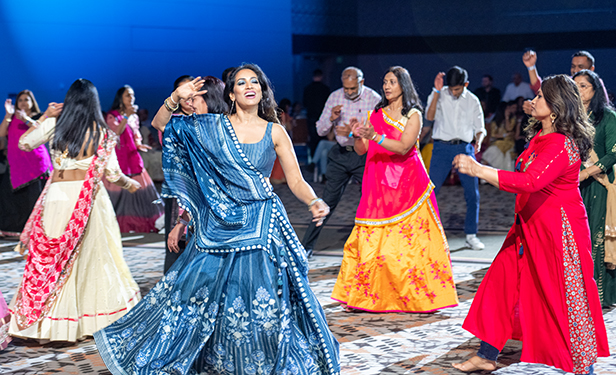 Like many trade shows and conferences that have returned to an in-person format over the past year, producing a massive event in an uncertain “post-COVID” climate didn’t come without its array of challenges, Patel added. This year, AAHOA show organizers faced the daunting task of putting together the massive event with a much shorter planning window, as the 2021 event had been pushed back from April to August due to COVID.

“In January, when we came here, we weren’t certain if we could pull this off, and it wasn't because of our team—our team was on it 100%,” Patel explained. “But then it was also the local government and the state of Maryland, where, because of COVID, they were limiting the number of people that can be in one room and so on. At that time there was so much uncertainty, but I’m glad everything worked out. Who would’ve thought that we’d have more than 6,000 attendees?”

While Baltimore’s mask mandate was officially dropped a few weeks before the convention, AAHOACON officials made sure to keep event participants’ well-being a top-of-mind priority. Although safety measures such as masks and social distancing were left up to personal discretion, the event made a point of reminding participants to maintain their personal hygiene practices, such as hand washing, to help protect themselves and others around them via plentiful signage throughout the event.

Learn more about AAHOA here, and watch a video recap of the 2022 event here.

IMEX Does Its Part to Support a More Sustainable Trade Show Industry
The IMEX Group has been ramping up its efforts to create a greener, cleaner and less wasteful trade show industry. As evidenced by the results of the IMEX America 2016…
CEIR TOTAL Index: Trade Show Industry Continues Its Growth Streak in Q1 2018
The Center for Exhibition Industry Research reports that the recent growth of the exhibition industry continued during the first quarter of 2018. The performance of the…
Retail Parallel: Embracing Technology and Its Impact on Trade Shows
What doesn’t kill you makes you stronger. This is especially true when it comes to technology and the evolving landscape of omnichannel retail for brick-and-mortar retailers…
Craft & Hobby Association Mega Conference and Trade Show Celebrates 75 Years
The CHA Mega Conference and Trade Show, the annual show for the Craft & Hobby Association that was held Jan. 7-12 at the Anaheim Convention Center, celebrated its 75th…
2021 TSNN Awards: Trade Show Innovation, Industry Leaders Will Be Celebrated Dec. 1-2 At Mohegan Sun
After the past year and a half that simply is indescribable in the impact that the pandemic has had on our industry, TSNN deliberated quite a bit before deciding to announce…
World of Concrete Reignites Large Trade Shows and Conventions
World of Concrete, which took place June 8-10 in Las Vegas, signaled the return of major trade shows in the United States. With banners flying over telescope cranes, power…