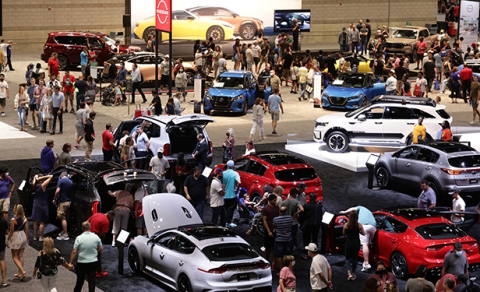 After sitting closed for nearly 18 months, Chicago’s McCormick Place is once again hosting major trade shows and events, has welcomed back more than 1,000 full-time employees and is boasting a robust events schedule. Following the NBA Draft Combine in June, the campus enjoyed a busy July that harkened back to pre-pandemic days, hosting three major events within a few days of each other that brought in more than 150,000 guests. These included the Advertising Specialty Institute (ASI), the Nike Tournament of Champions and a special edition of a marquee event that McCormick has hosted for 60 years: the Chicago Auto Show.

Held July 15-19 as an indoor and outdoor summer event for the first time ever, the Chicago Auto Show is the country’s largest and longest-running auto exposition. Launched in 1901, the massive consumer show is produced by Chicago Automobile Trade Association (CATA), which has staged the event since 1935.

This year, the abbreviated, five-day show hosted more than 100,000 attendees, who converged upon McCormick to ogle the latest cars, trucks, SUVs and electric vehicles on the market, get behind the wheel at indoor and outdoor test drives, check out special demonstrations and enjoy an all-new outdoor Street Fest complete with food trucks, local brews, street musicians and vehicle displays.

“We were ecstatic to be able to open our doors to fans this summer for a special edition of the Chicago Auto Show, which turned out to be a great success,” said Dave Sloan, general manager of the Chicago Auto Show. “This year’s event really showed off McCormick Place’s versatility. To be able to move from one hall to another and give the show a totally new look and personality was eye-opening. We’re already looking forward to and planning next year’s show, which will return to its traditional February timeframe.”

He continued, “We were proud to be the event that helped drive the venue’s reopening as we’ve been a long-time trusted partner of McCormick Place…[the venue] is an important economic engine for our city and state, and we took very seriously the responsibility that came along with helping to get it running again.”

According to McCormick officials, the show’s organizers began working with the convention center six months in advance to co-develop an opening plan, as it became evident early on that the Chicago Auto Show would provide a pathway to the facility’s re-opening while bringing much-needed economic impact to the local and state economy.

Show organizers designed a host of pandemic safety protocols for the event, which resulted in the show being one of the first major events to be approved by city and state officials. However, soon after the approvals were granted, Illinois entered Phase 5 reopening, and most of those protocols no longer needed to be implemented, forcing organizers to rethink many of the entry procedures. (Illinois Governor J.B. Pritzker has since ordered a statewide indoor mask mandate, which went into effect Aug. 30). Then there were a number of other hurdles that had to be overcome just to open the show.

“It seemed like every time a challenge was overcome, a new obstacle presented itself,” Sloan said. “For example, exhibitors faced a shortage of display vehicles due to the global chip shortage. Additional conflicts included the shortened move-in window and the busy summertime event schedule for the city that we were competing against.”

He continued, “There’s so much to do in Chicago in the summer that doesn’t typically overlap with our February show. We had to get creative in order to capture our attendees’ attention at a completely different time in the calendar year. That wasn’t easy, especially when you’re talking about a seven-decade tradition of the Chicago Auto Show being held in February.”

This year also marked the first time the show exclusively sold tickets online, which ended up being well-received, according to CATA Chairman Kevin Keefe.

“Talk about flying without a net,” Keefe said. “It will be interesting to see how the digital process affected the demographics of our show, not to mention, we’re thrilled to be able to receive all of the data associated with online registration.”

During the event, many exhibitors reported strong foot traffic through their displays and the indoor test tracks, with more than 15,000 experiences provided between the Jeep and Ram tracks.

“We were thrilled to be back at the Chicago Auto Show,” said Exhibitor Jason Russ, head of experiential for Stellantis. “The crowds exceeded our expectations onsite, where we had constant motion on the Camp Jeep and Ram Truck Territory test tracks. To see so much foot traffic solidifies that people still love to visit auto shows to not only view our latest products but to also take part in the thrilling driving activations that we offer with our vehicles.”

With the challenging but successful 2021 edition of the show behind them, the show’s organizers are looking ahead to the Feb. 12-21 edition while also considering all the valuable learnings garnered from planning and executing a major consumer show during a pandemic.

“This was certainly a unique show that sparked our creativity and provided us many key lessons as we move forward,” Sloan said. “This special edition show was the perfect blend of consumer engagement and interest, manufacturer ROI, digital analytics and data capturing, and symbolism of both the city and state’s reopening. Not knowing what to expect going in, we were pleasantly surprised with the outcome.”

He added, “While we are planning to return to a February show next year, we will continue to carefully evaluate all the results from this show and decide what aspects of this event we might implement into our show in the future.”