McCormick Place Is Ready to Light Up With Events Again 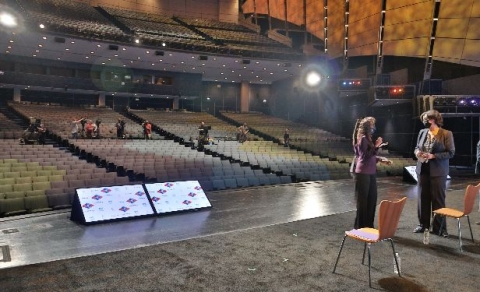 Peter Eelman, vice president and CXO at AMT — The Association For Manufacturing Technology, strode up to the stage at Arie Crown Theater at McCormick Place. “We are coming back,” he said. “Let that soak in for a moment.”

While he was specifically referring to the International Manufacturing Technology Show powered by AMT, occurring Sept. 12-17, Eelman may as well have been speaking for Chicago’s trade show industry.

Shut for 14 months due to COVID, McCormick Place officials and several returning organizers gathered in May to celebrate the return of business. The event was also a showcase of new offerings the convention center has installed to prepare for the brave new world. The highlight is a 4,000-seat hybrid studio powered by Freeman that served as the setting for the press conference. There are two other virtual studios available on-campus.

“We need to continue to be flexible and see what is on the horizon,” said David Causton, general manager of McCormick Place.

What’s on the horizon is a substantial number of events, including the famed Chicago Auto Show, to fill out the 2021 calendar before a packed schedule in 2022 and 2023, featuring many returning events like the Sweet and Snacks Expo that were forced to relocate this year.

Citing what she described as “Hollywood-grade technology,” Larita Clark, CEO of the Metropolitan Pier and Exposition Authority that oversees Chicago’s vast convention and expo properties, said the site is capable for all needs. That includes pumping money and momentum into the Second City’s economy.

“We didn’t take a single day of the past 14 months and let it go to waste,” she said. “We are returning to business as usual”

With the reopening of McCormick Place, entirely GBAC Star certified, and the adjacent Marriott Marquis Chicago, the task of hiring staff is ramping up. Clark said 970 full-time employees will be back to work by June, and within a year, that number will nearly double. And each hire at McCormick Place represents another five job opportunities in the local hospitality industry, she added.

More than 120 events are on the books between July 2021 and December 2022, 47 of which are considered major. Economic impact is estimated to be $2.35 billion with nearly 2 million attendees coming to town.

FABTECH added to the good news, recently announcing plans for a return Sept. 13-16, making it the first large-scale manufacturing event at McCormick Place since the pandemic. It brings in $73 million delegation spending to Chicago, according to Ed Youdell, president and CEO of the Fabricators and Manufacturers Association, International. More than 30,000 attendees are expected.

Other key events coming to Chicago include:

RSNA Vice President Steven Drew said 10,400 abstracts have already been submitted for the late fall event. “That’s testimony to the interest in the meeting,” he said.

Likewise, IMTS is looking bullish for September. Eelman reported that more than 1 million square feet of exhibition space has already been sold and they are expecting 130,000 attendees.

“It’s been a struggle, but we can see light at the end of the tunnel and the light is coming soon,” Eelman said.

ProFood Tech Show Set to Launch in 2017 at Chicago’s McCormick Place
Three different entities have teamed up to launch ProFood Tech, a new event that will focus on processing technologies serving the food and beverage industry. ProFood Tech…
2018 International Home + Housewares Show Sells Out in Chicago’s McCormick Place
The 2018 International Home + Housewares Show sold out in late December, more than 10 weeks before opening day March 10 at Chicago’s McCormick Place, according to the…
How Chicago’s McCormick Place and Detroit’s TCF Center Are Amplifying Green Efforts
As the importance of lessening the environmental impact of meetings, trade shows and events only continues to grow, here’s what two Midwestern convention centers are doing to…
Light Reading’s Big Telecom Event a Success with Attendees and Sponsors
In April, TSNN reported on the Big Telecom Event being produced by Light Reading. CEO and founder of Light Reading, Stephen Saunders had referred to the Big Telecom Event as…
A Small Place with Big Ambitions: Planning Your Next Meeting in Providence, R.I.
Planning an event is more than just the number of hotel rooms and square footage of event space available.  These days, your attendee is interested in the destination…
OCCC to Host Together Again Expo, Educating Events Industry on Safety Best Practices
Orange County Convention Center in Orlando is getting back to business safely by welcoming a trade show and conference designed to help the live events industry do the same…