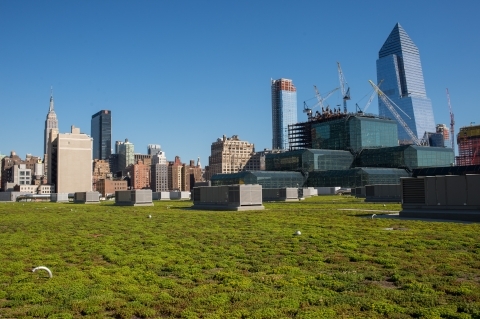 Imagine you’re at a large trade show in a giant convention center among throngs of people and you’re starting to feel tired and stressed.

Instead of just grinning and bearing it, you’ve arranged to take a break and venture to the facility’s green roof, where a sprawling garden of plants and flowers, along with birds, bees and butterflies, awaits you.

As you drink in the serene, meadow-like landscape and beautiful city views, you enjoy a leisurely stroll, breathe in some fresh air and suddenly realize you’re not feeling nearly as tired or stressed out anymore. In fact, after just a few minutes you’re feeling more relaxed, refreshed and ready to take on the trade show once again.

Such a scenario can easily become a reality for event participants at New York City’s Javits Center, which has opened its green rooftop for free summer tours between May and October.

Furthermore, the rooftop greenscape – the second largest of its kind in the U.S. – has not only become a big city oasis for local wildlife but also is serving as a natural means to reduce energy usage throughout the massive convention center.

Although the facility has been providing green roof tours on a limited basis to small groups by appointment since the roof’s completion in 2014, it wasn’t until recently that Javits decided to formalize the process and offer tour registration online, according to Tony Sclafani, Javits Center senior vice president and chief communications officer.

“We are very proud to offer these tours since the success of the green roof reflects our renaissance as a building and an organization,” Sclafani said.

He continued, “In order to conserve energy and reduce storm water runoff, the green roof was constructed as part of a recent renovation from 2009 to 2014. Since its installation, the roof has become a sanctuary for area wildlife while reducing the building’s energy consumption, proving the power of sustainable building and its positive impact on the environment.”

So far, the facility’s sustainable upgrades that include energy-efficient HVAC units, energy-efficient lighting and the green roof, have helped Javits reduced its energy consumption by 26 percent, according to Sclafani.

Besides helping to conserve energy and turn the convention center green, the earth-friendly upgrades have helped Javits save precious lives.

With its giant translucent windows, the convention center was once one of the city’s biggest killers of birds. The addition of darker, pixelated glass panels along with the green roof has not only helped the facility reduce bird collisions by an estimated 90 percent, but has also given the city’s winged residents a safe place to rest, hang out and nest.

“Since its installation, more than 17 bird species and five bat species have been observed on the roof,” Sclafani said.

He added, “Some birds have even built nests, where they have laid dozens of eggs.”

Although Javits receives constant requests for hosting group activities on the green rooftop, for now, the facility’s focus is on maintaining the space, raising awareness about its impact and evaluating how it is changing the surrounding environment, Sclafani explained.

“In essence, the green roof is a living laboratory and we have partnered with various institutions to study its impact on the environment, including the New York City Audubon, Cooper Union and Drexel University,” he said.

Besides requesting a free tour, which is available on a first-come, first-serve basis and limited to 30 participants, conventioneers can also observe the green roof in real time via a live roof cam.

Learn more about the Javits Center green roof by checking out this great video.

Read more about the center’s renovation and expansion efforts here.