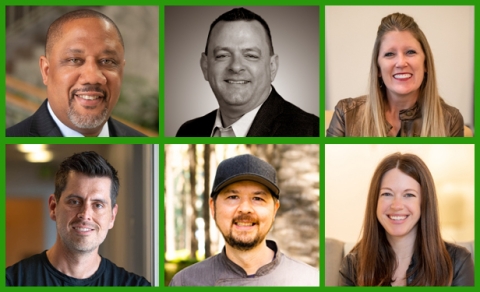 While the hiring craze that consumed the trade show industry over the past 18 months is showing signs of winding down, event-related organizations far and wide are still welcoming new and experienced talent to their teams, including established industry veterans, as they set their focus on success and growth in the new year ahead. Take a look!

Global venue and event strategy and management leader ASM Global has named industry veteran Kelvin D. Moore as regional vice president and general manager of McCormick Place in Chicago. As general manager, he will not only focus on providing strategic leadership and day-to-day operational management but also on creating new programs and partnerships designed differentiate Chicago as a choice event destination.

A 30-year facility-operations veteran, Moore has held leadership positions at convention centers, stadiums and multi-purpose facilities throughout the U.S., most recently as regional vice president and general manager for ASM at the Pennsylvania Convention Center in Philadelphia. Prior to his time there, he served as regional general manager for Chicago’s Festival Hall Complex at Navy Pier.

Moore succeeds David Causton, who served as McCormick’s general manager since 2004. During his tenure, Causton oversaw strong revenue growth as well as the convention center campus expansion, including planning and construction of the McCormick Place West Building and the construction of the 10,000-seat Wintrust Arena.

After less than one year with ASM Global as its executive vice president of marketing, Alex Merchán has been promoted to chief marketing officer, responsible for overseeing a global portfolio representing 20,000 events across 350 venues. In his new role, Merchán will spearhead ASM’s branding and positioning across key areas including global partnerships, digital and CRM strategy, business development and advisory and investing efforts across the U.S. and internationally.

Johnson’s first move was to add Dana Baldwin as an account executive to the sales team, where they will work to meet the advertising and promotional needs of EXHIBITOR’s clients. Baldwin previously served as national sales manager at Louisville Tourism.

A graduate of the Certified Trade Show Marketer (CTSM) program, Stephanie Gibbs assumes the role of executive director of the CTSM program. Gibbs previously served as client services manager at Star Exhibits & Environments and Customer Service Manager for myBackyardStudio. Prior to that, she was an event specialist for Merrill Corporation.

Global venue and event management software provider Ungerboeck has appointed seasoned software executive Alex Alexandrov as its new CEO. He joins Ungerboeck from SoftwareONE, where he served as a member of the executive board, COO and president of the Latin American region.

During his tenure at SoftwareONE, Alexandrov and the executive team grew revenue by more than 300% and quadrupled EBITDA. He was instrumental in driving profitable growth, industrializing global shared service centers, building an M&A and post-merger integration program with 20 acquisitions and creating internal digital transformation. He also led the company’s successful IPO in 2019.

Prior to SoftwareONE, Alexandrov served as a managing director at Thomas H. Lee Partners, where he participated and led investments in technology services and fintech with Systems Maintenance Services, CompuCom, Black Knight, ServiceLink, System One, Nielsen and FIS.

Bringing extensive experience in retail, brand development and technology, including brick and mortar retail and digital, Ryder’s previous roles include vice president of growth for Michaels, global head of brand and retail at RewardStyle (now LTK) and director of global innovation and corporate strategy at the Estee Lauder Companies.

Aramark, the exclusive caterer for the Anaheim Convention Center (ACC), has welcomed Bernard Foster as executive chef, responsible for leading the venue’s food and beverage program. In his new role, Chef Foster will bring a diverse and fresh perspective to the ACC by blending fusion foods and traditional cuisine from different cultures.

Foster has previously held executive chef positions at several Hyatt hotels and has been instrumental on grand opening and renovation teams for numerous hotels worldwide. Through his work, he has remained committed to reducing his carbon footprint, a mission that aligns with Aramark’s existing sustainable sourcing commitments.

Prior to joining Skyline, Montgomery most recently served as senior vice president of client and exhibitor services at GES, and has held previous positions in sales, client services and operations.

Have some event-related People News to share? Please send announcements and high-resolutions headshots to lpsavas@tsnn.com.