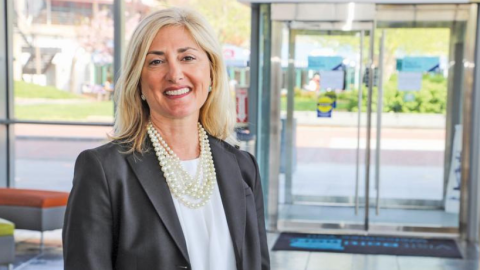 April showers brought May new hires to many companies in the trade show and destination marketing world. Here’s all the news you need to know.

Big news for the Events Industry Council: The Washington, D.C.-based organization appointed a new CEO in April. Following an extensive global search, Amy Calvert is now leading EIC. She brings more than three decades of experience in the industry to her new role, and was most recently with Visit Baltimore. (Stay tuned for more on Calvert in an upcoming Q&A on TSNN!)

Dawn Holden joined Destinations International as vice president of membership engagement in April, with her first day on the job this week. In her new role, she will develop and implement overall strategic direction of DI’s membership operations, including recruitment and retention of members, member services and engagement. Most recently Holden was vice president of partnership development for VisitPittsburgh. Also at DI, Paula Beck has is now director of marketing. Beck was previously with Aramark’s Parks & Destinations division as well as onPeak LLC.

Caesars Entertainment Corporation’s board of directors named Anthony “Tony” Rodio CEO in April. He will join the board of directors and be based in Las Vegas. Most recently, he was CEO of Affinity Gaming and brings nearly four decades of experience in the gaming industry to his new position.

Experiential marketing agency Access TCA has brought Pat Haggerty back as senior exhibit designer after a 13-year absence from the company. He’s designed everything from exhibits for Zippo lighters to projects for Ericsson and will bring his expertise in fabrication, technology and materials trends to his new position.

Following the retirement of Jean-Claude Madier, current managing director of the Life, Leisure & Experience division of Comexposium, in June, Carine Préterre will step into this leadership role. Préterre is currently event director of Foire de Paris and will transition next month. Jean-Claude joined Comexposium in 1993, and Préterre has been with the company since 2012.

Maureen Carter has joined international destination marketing company CSI DMC, headquartered in Washington, D.C., as vice president of national sales for the West Coast. She was most recently national sales director at The Broadmoor resort in Colorado Springs, Colorado.

David Mandt has been promoted to executive vice president and chief engagement officer for IAAPA, the global association for the attractions industry. In this newly created position, he’ll oversee association member engagement as well as global marketing, communications and education.

Jorge Martinez Garibay has been named EXPO PACK General Director at PMMI, The Association for Packaging and Processing Technologies’ Mexico office, where he will direct sales, marketing, operations and PR efforts for EXPO PACK México and EXPO PACK Guadalajara. Additionally, Laura Thompson has been promoted to vice president of trade shows at PMMI; she previously served as senior director of expositions.

AVIXA, the Audiovisual and Integrated Experience Association, announced Sarah Joyce as new chief global officer in April. She comes to AVIXA after a dozen years at Electrosonic Ltd. Joyce will take over from Terry Friesenborg, who retires at the end of this year.

ProExhibits has brought on Peter Gallagher as creative director. In this role, he will lead the design team in helping clients in guide their visions into brand-building experiences and environments. He will also manage the creative team for ProGlobalEvents, the sister company of ProExhibits that focuses on corporate events.

Visit KC, the CVB promoting Kansas City, Missouri, added Nathan Hermiston to the team as senior vice president of sales and services. He was previously with Meet Minneapolis CVB and brings 15 years of experience to the leadership team.

MetroConnections, headquartered in Minneapolis, has two new additions to the team. Danielle Miles has joined as manager of conferences and meetings, where she will oversee the conference and meeting management teams, as well as all client work in both areas. David Everett is sales manager and also an experienced event designer. He will focus on designing experiences and continuing to grow his client base.

Business information company Questex has expanded its team by two. Kurt Nelson has been named group vice president of talent strategy, where he will create the human resources direction for Questex; and Derek James is now director of information technology, where he’ll implement new strategies to improve and maximize technology resources.

Have People announcements to share? Send them to kogletree@tsnn.com.

People News: Freeman, PCMA, Clarion UX and More Make Hires
Companies within the events and tourism world continued with a flurry of hires in March, showing the economy and outlook for the industry looks strong. Freeman has named a…
People News: Destinations International, IAEE, Offprice and More Make Hires
Summer’s coming to a close, the kids are back in school, and companies in the meetings and hospitality space are ramping up hires for the last third of the year. Take a look…
People News: SGIA, Reno, Atlanta, Bellagio and More Make Hires
Hiring didn’t slow down in the typically mellow month of August with several cities adding to their convention and visitors bureau ranks, as well as some service providers…
People News: SMG, Visit Spokane, JCK & Luxury, DMG Events and More Make Hires
The year started off with a flurry of new hires, making for a busy and exciting January. Here are all the industry professionals who have been making some big career moves…
People News: Core-apps, L.A. Convention Center, Comexposium and More Make Hires, Promotions
In the past, companies typically slowed down with their hiring and other employee changes throughout the summer months, but not anymore. Now, it’s full steam ahead all-year…
People News: Fern, CEIR, MGM, Philadelphia CVB and More Make Hires
See who’s making big strides in their career this month. Have more people news to share? Send it to kogletree@tsnn.com to be included in our next story. Jim Kelley has…