Going Green Still a Focus in the Trade Show Industry 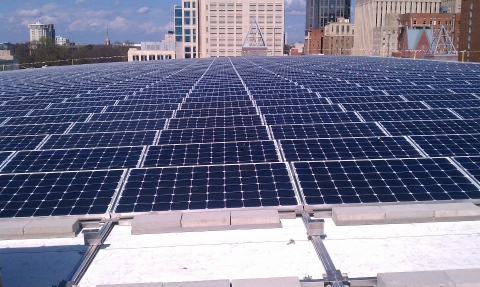 In the wake of the economic downturn, one might assume that the environmental movement in meetings, events and trade shows would have slowed or even come to a halt as the industry turned the bulk of its attention to financial survival.

But surprisingly, if anything, the green movement has continued its forward momentum despite the recession, with no sign of stopping. So what’s the main driver? Many shows, companies and organizations have realized that going green just makes smart business sense.

“The environmental movement in our industry has increased and become more mainstream,” said Nancy Zavada, principle of MeetGreen. “I completely expected the opposite to happen, but I think it comes down to the fact that many and/or most of the strategies for environmental meetings offer cost savings.”

She added, “that really hit home for hotels and convention centers, since their energy, water and waste savings made a huge impact on their bottom line. People started looking at (greening) not because it was the right thing to do, but because it made an economic difference. For that reason (the recession) was actually helpful.”

And for shows, venues and organizations that truly understand the long-term benefits of sustainability, the recession hasn’t impeded their greening efforts, said Wendy Scott, national account manager of Experient.

“Research and trends show that groups are increasingly embracing sustainability as part of their mission,” Scott said. “There is demand from many stakeholders for organizations to become more and committed in this area.”

She added, “I only see (interest) increasing and as the successful results are shared more and more, others will realize the benefits are worth the efforts.”

While many shows continue to adopt and fine-tune sustainable practices, including recycling and energy and water conservation, one emerging trend is the desire to measure and verify the efficacy of their efforts, Zavada said.

“What I’m seeing is that measurement is becoming far more important than it was in the past, to show how much money and how much of the environment they’re saving,” she added. “Being able to prove you’re not greenwashing has become very important.”

Other green trends include a bigger focus on locally sourced food and beverage, as well as facilities and hotel properties creating designated sustainability staff positions, she added.

On the venue side, many convention centers are not only continuing to add environmental practices to their operations, but also are making financial investments to improve their green capabilities, said Brittin Witzenburg, sustainability coordinator of the Oregon Convention Center.

The Oregon CC is one of approximately 20 convention centers in the U.S. that have earned Leadership in Energy and Environmental Design (LEED) certification through the U.S. Green Building Council.

“I do believe that more and more facilities are recognizing, whether they’re big capital improvements or the low-hanging-fruit-kinds of actions, that there are benefits to including (environmental practices) in their normal operations,” Witzenburg said.

But besides the fact that going green can save green, it also can do a lot to improve a show, venue or company’s image, Zavada said.

“How people are doing meetings is really being looked at,” she added. “If they’re not looking like good corporate citizens or like they’re ethical and using the earth’s resources wisely, their constituents are taking a look at that.”

One recent development that could be a game-changer for the sustainable events movement is the recent release of the long-awaited APEX/ASTM Environmentally Sustainable Meeting Standards.

As the result of a partnership between the Convention Industry Council’s Accepted Practices Exchange (APEX) and the American Society for Testing and Materials International (ASTM), they are the industry’s first and only comprehensive standards for environmentally sustainable meetings. Currently, eight of the nine standards that cover key sectors of the meetings and events industry are now available through the CIC.

“I think the next step is going to be for everybody to begin adopting those standards or at least working within (them) so we all have the same version of green,” Zavada said. “My hope is that now that there is a standard the government (will adopt it) and that will shove our industry into overdrive.”

And while the APEX standards will be a big help in getting the industry on the same green page, there still is work to be done, including getting more buy-in from exhibitors, Witzenburg said.

“Individual exhibitors need to be more involved,” she added. “It’s one thing for a planner and a venue to provide all of the right tools, but if (exhibitors are) not using those tools than it almost doesn’t matter.”

Witzenburg said, “I definitely think there are opportunities to educate, incentivize and get those individuals more involved. Harnessing that will bring another level of success.”

CEIR Predict Conference Focuses on What’s Transforming the Trade Show Industry
Washington, D.C - When the Center for Exhibition Industry Research’s CEIR Predict Conference was held last week in Washington, D.C., one thing was abundantly clear – as…
Why Direct Mail Should Still be in your Trade Show Marketing Plans
It's easy to get caught up in the latest and "greatest" in technological gimmickry.  However, the tried-and-true methods still work, and you shouldn't overlook them when…
Is Your Traditional Sponsorship Model Still Working for Your Trade Show?
If you’ve been a trade show organizer even for a short period of time, you know that event sponsorships can be crucial to the financial health and wellbeing of your event.…
Small Booth? Here's How You Can Still Win Big at Your Next Trade Show
Trade show professionals know that bigger booths tend to grab the most attention from attendees. A bigger booth means that massive creative displays can be set up, so…
4 Ways to Green Your Trade Show Team in 2015
Going green is a constantly evolving practice. As technologies improve and ideas are spread, there are always new ways to make your next event greener than the last. One of…
SEMA Show Still Cruisin' After Five Decades
Fifty years ago, about 2,000 attendees and 80 exhibitors gathered under the grandstands at Dodger Stadium in Los Angeles for the first Speed Equipment Manufacturers…